Legislation would set aside legal obstacle for women who underwent symphysiotomies 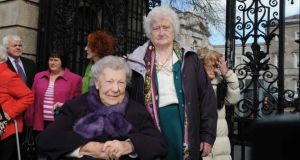 Members of the Survivors of Symphysiotomy group Ellen O' Brien and Rita McCann at Leinster House before a briefing for Oireachtas members and staff on the issue of symphysiotomy. Photograph: Clodagh Kilcoyne

The Government has accepted draft legislation that would allow women who underwent symphysiotomies - a controversial childbirth procedure - to seek redress in the courts.

A spokesman for Minister for Health James Reilly yesterday confirmed that the Government will not oppose a Private Member’s Bill aimed at setting aside the statute of limitations in these cases.

This legal obstacle has prevented most of the surviving women who underwent the operation during the 1960s, 70s and 80s from seeking justice or redress in the courts.

Minister Reilly’s spokesman said there were some “serious flaws” in the proposed legislation which could be dealt with by way of amendments. However, he said the Government was broadly supportive of legislation that could assist the women.

Symphysiotomies involved sawing a pregnant woman’s pubic bone in half to widen the birth canal. For many, it women permanent injuries such as incontinence, difficulties walking and chronic pain.

Of the estimated 1,500 women who underwent the procedure, it is estimated that fewer than 200 survivors remain.

Many of these women were in the public gallery of the Dáil last night for the openi ng of a debate on the legislation.

One of the women in the gallery, Ellen O’Brien, 91, from Inchicore, underwent the operation in 1961. She said she was delighted with the breakthrough.

“It’s marvellous, abosolutely marvellous. I’m been waiting for years for this... all I was told at the time was I was having a ‘slight operation’. I only found out what happened many years later. It’s been dreadful - pains, stiffness. I couldn’t walk far afterwards. I’m still in a lot of pain,” she said.

Speaking in advance of the debate, Mr Ó Caoláin said he hoped the legislation would be passed as quickly as possible, given that similar legislation passed for abuse victims took around two years to be enacted.

The tabling of the Bill follows lengthy lobbying by the Survivors of Symphysiotomy support group which gathered more than 20,000 signatures in support of its campaign for justice.

The group’s spokeswoman, Marie O’Connor, said the progress was testimony to the hard work and support of its supporters.

“Many of our members are no longer in the springtime of life. It is essential there are no further delays enabling them access to truth and justice,” she said.
“This change means that women’s cases can no longer be tripped up in the courts over points of procedures and arguments over time.”

A report commissioned by the Government last year found that use of symphysiotomies was at its peak in Ireland when it had declined in the rest of Europe.

The use of the procedure was concentrated in a handful of hospitals, according to the report. These include Our Lady of Lourdes Hospital in Drogheda (348), the National Maternity Hospital (281) and the Coombe in Dublin (242).

The use of symphysiotomy began to decline from the late 1950s as a result of increased confidence in the safety of repeated Caesarean sections. However, Our Lady of Lourdes Hospital continued with the procedure until 1984.

It found that while some obstetricians heralded the operation as a solution to difficulties in labour, others refused to contemplate it because of fears for the long-term health of mothers.

The report - which was heavily criticised by survivors’ groups - found that symphysiotomies were considered appropriate in emergencies by some obstetricians during the 1940s and 1950s, when a mother could not safely deliver her baby.

This was because of safety concerns about repeated Caesarean sections – associated with a higher number of deaths at the time – and the ban on contraception and sterilisation.

A spokesman for Minister Reilly said in addition to accepting legislation that seeks to remove the statute of limitations for survivors, the Government is also examining how best to meet the health and social needs of women affected.

Mr Reilly is due to receive a second report into the use of symphysiotomy in a number of weeks which will help shape the Government’s reponse, his spokesman added.