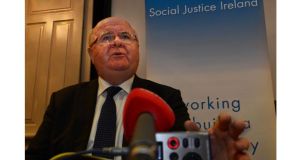 Over 700,000 people are in poverty across the State according to figures published by the Central Statistic Office (CSO) today.

The latest analysis of the poverty statistics published by the CSO shows that the number of people in poverty has now reached a record level of 733,000.

Social Justice Ireland has challenged the Government in failing to tackle what they describe as the "working poor" and those depending on social welfare payments.

“The increase in the proportion of Ireland’s population at risk of poverty, from 14.7 per cent to 16 per cent in one year, clearly identifies a major policy failure by Government which has imposed a disproportionate part of the ‘hit’ for current budgetary adjustments on Ireland’s poor and vulnerable people.

The Government should give priority to ensuring that everyone in Ireland has the income and services to live life with basic dignity, which is not currently the case,” said director of Social Justice Ireland Fr Seán Healy,

The CSO figures show that more than 232,000 children are at risk of poverty, representing18.8 per cent of all children, compared to 18.4 per cent a year earlier.

International duty off the menu at Liverpool due to quarantine rules, says Klopp 22:30
Vettel confident new Aston Martin team will give him licence to thrill 22:30
Facebook to lift ban on political advertising in US 22:24
Gunman ‘smirked’ and walked away after firing shots, David Douglas murder trial told 21:43
Sturgeon dismisses ‘absurd’ allegations of plot against Alex Salmond 21:25