Public service pay cuts could reduce activity in economy by up to 0.5%, official figures show 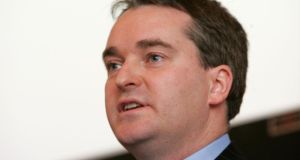 Robert Watt: secretary general at the Department of Public Expenditure and Reform set out forecasts on economy in letter to unions. Photograph: Frank Miller


The Government’s plans to reduce its public service pay and pensions bill by €1 billion will cut economic activity by up to half of 1 per cent, according to official estimates.

The forecasts of the impact of the cuts on the economy were set out in a letter by secretary general at the Department of Public Expenditure and Reform Robert Watt to trade unions during the recent talks on a new Croke Park II agreement.

The letter has been released to The Irish Times under the Freedom of Information Act.

In it, Mr Watt said the recent deal secured by the Government on the promissory notes would have “no significant effect” on the overall public finances this year.


Promissory savings
He said the promissory note savings would be offset by eligible loan guarantee payments and by interest payments on new government bonds.

Mr Watt said model simulations suggested that a €1 billion reduction in the public service wage bill would reduce the level of economic activity by somewhere in the region of one-quarter to one-half a percentage point in the short run.

“The exact impact would, of course, depend on how the reduction was achieved. The impact on the economy must be balanced against the need to ensure that the fiscal deficit is reduced so that debt-to-GDP assumes a downward path from next year onwards.”

Chief executive of the Labour Relations Commission Kieran Mulvey continues to make contact with trade unions to determine if there is a prospect of a deal on reduction of the Government’s pay bill. The issue of a proposed new Croke Park agreement and the fallout from its rejection by staff is expected to dominate proceedings at the annual conferences of the Civil Public and Services Union and the Irish Federation of University Teachers.

Members of the Irish Federation of University Teachers will debate an emergency motion by its UCD branch and endorsed by its executive which states that the union would not engage in any clarification or modification to the terms of the Croke Park II proposals. The motion states “members will not be reballoted on any revision or clarification to Croke Park II unless a decision to do so is taken at a special delegate conference”.

It also says the union would “ fight with all of the resources at its disposal any attempt by Government and/or our employers to enforce all or any of the terms of Croke Park II or any alternative unagreed measures, including pay cuts”.