With friends like this bunch of TDs, who needs enemies? 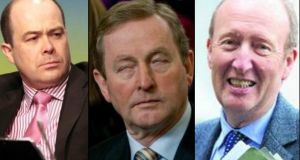 It took Enda Kenny’s Fine Gael three months to convince Denis Naughton and Shane Ross to park their independence and sign over their support. Photographs: The Irish Times

They have been dubbed the ‘Endapendents’ – the eight Independent TDs keeping the minority Government afloat.

Zappone was the first out of the traps to support Enda Kenny as Taoiseach. She was rewarded with an appointment as Minister for Children. Many have applauded her shrewdness; others have questioned how quickly and how strongly she has aligned herself to Fine Gael.

Her decision to vote against a Bill which allows for abortion in the cases of fatal foetal abnormalities is seen by some as damaging her standing.

While in the Upper House, Zappone voted in favour of an amendment to the Protection of Life During Pregnancy Bill allowing for terminations in these cases. Back then she even made a grand speech calling for politicians to take a stand on the issue.

Despite a free vote being secured, Zappone sided with Fine Gael this time round, a decision that was either politically destructive or incredibly pragmatic.

She and Naughten, the Minister for Communications, share a few things in common. Both are close to Fine Gael. Neither actively seek the limelight. And, probably more interestingly, both have hired former Fianna Fáil advisers to assist them in their portfolios.

Both Independents are all too aware Fianna Fáil is likely to lead the next Government. And who better placed to lead negotiations with the party than their former advisers? Neither TD are in this for the short-term.

Naughten is a deal-maker. He demonstrated his pragmatism during the Government negotiations, which earned him his seat at the Cabinet table. He has been an effective Minister, quietly making headway in a department that deals with broadband, climate change and bin charges.

For Fine Gael, the real tension is with the Independent Alliance.

Little is known outside Leinster House about these Government king-makers. The group was formed in 2015 and headed by Roscommon- South Leitrim TD Michael Fitzmaurice, Dublin Rathdown TD Shane Ross, and Dublin Bay North TD Finian McGrath. Fitzmaurice has since left the group.

Only minutes before the third vote for Taoiseach did it become clear that they would support Kenny and a Government could be formed.

The Alliance was rewarded with a ministry, a super junior ministry and two ministers of state. It is a decision many in Fine Gael questioned and even more resented.

Observers believe Ross and Waterford TD John Halligan are uncomfortable in Government. Both are long-serving politicians, but this is their first dalliance with power.

Those close to Ross say he has not settled well into his office. After three months as Minister for Transport, he has yet to outline his priorities or policies.

One colleague suggests Ross is concerned about making grand announcements, fearing a speech in opposition or an old Sunday Independent column may come back to haunt him.Having spent 34 years in opposition, there are probably few topics Ross had not expressed an opinion on.

Halligan, meanwhile, was always going to be the Alliance’s live wire. The Minister of State for Training and Skills is strong-headed and rarely shies from controversies. If anyone walks away from this arrangement, it will be Halligan. He has flirted with the idea twice already.

Finian McGrath, also a long-standing opposition politician, has been more productive than his two Alliance colleagues. Having chosen to serve in the disability portfolio, the Dublin Bay North TD is eager to make a real change in the area.

McGrath has set his sight on securing a number of smaller and significant measures. As long as they get over the line, he is content to continue supporting the Government.

The other two pieces in the Alliance jigsaw are Minister of State at the Office of Public Works Sean Canney and Longford-Westmeath TD Kevin ‘Boxer’ Moran.

It is rare to see one without the other. Both are level-headed, politically clever individuals who often appear puzzled by their colleagues’ desire for the limelight. Both have tasked themselves the job of establishing a new policy on flooding. As the civil servants in the Office of Public Works have come to learn, neither is for delaying on this issue.

A bizarre and unprecedented sequence of events unfolded. Ross and McGrath, the only two Alliance members at Cabinet, argued against the AG’s advice.

It became clear that the two senior Ministers plus Halligan would support the proposed legislation. They insisted they could not vote against the Bill, having previously supported the exact same piece of legislation. The three had already accepted the official position on Irish Water, despite McGrath and Halligan campaigning against water charges.

No contact took place between the Alliance and Kenny to resolve the row. Three days before a debate was to take place, Ross went on RTÉ’s Morning Ireland to confirm his intention to support the Wallace Bill.

Kenny was left with no option. He could allow a free vote or watch his Government collapse. The Alliance won.

The row damaged relations between the two sides irrevocably. Fine Gael is desperately uneasy with the Alliance. It is paranoid of Halligan and Ross, in particular. The feeling is mutual.

Many predict the date of the next election will be decided by Micheál Martin and Fianna Fáil. But as the Budget nears and the decisions get tougher, the Endapendents will likely be the ones who make or break this Government.