Will the next Labour leader stay the course with Fine Gael? 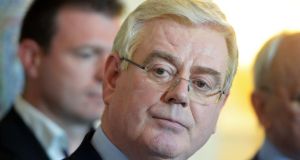 Tánaiste and Minister for Foreign Affairs Eamon Gilmore at the announcement of his resignation yesterday: his successor will be under extreme pressure to rebuild a battered party. Photograph: Eric Luke

The Coalition faces a prolonged period of uncertainty after Eamon Gilmore’s abrupt resignation. In question for weeks to come is whether Labour will elect a successor who can stay the course with Fine Gael or who will lead the party out of Government.

Taoiseach Enda Kenny was quick to declare last evening that Gilmore assured him Labour remained fully committed to stable Government and the completion of the mandate to repair the public finances and create jobs. But that pledge is from an outgoing leader who has just led Labour into a devastating electoral defeat. It will be for Gilmore’s successor to plot the party’s future course in the Coalition.

As news of the Tánaiste’s departure emerged yesterday, the conclusion was quickly drawn in Leinster House that his demise will ultimately bring forward the date of the next general election. Exactly when remains unclear. But the potential for serious political disruption in the short term is clear, even if the new leader vows to resolutely maintain the bond with Fine Gael. The prospect of the Coalition surviving until 2016 is another matter entirely.

Having lost scores of council seats at the weekend, Labour TDs are now confronted with their own electoral mortality. This is the prism through which the election of the new leader will be viewed. The same goes for decisions made in the crucible of Cabinet. Faced with the titantic task of renewing a battered party as the Government collects new taxes, Gilmore’s successor will be under extreme pressure from the off.

Whoever wins will take office in July, just as the budget estimates campaign gets under way in earnest. So the immediate question will be whether Labour, under new management, can settle with Fine Gael on a fiscal plan for 2015. This presents an immediate existential test for the Coalition, and the challenge will be all the greater for the leadership contest to come.

Key battleground The key battleground in the race to succeed Gilmore will be economic policy. Be it Joan Burton, Brendan Howlin, Alex White, Arthur Spring, Alan Kelly, Seán Sherlock or any other contender, this element of the debate is likely to centre on the drive to boost take-home income and provide badly needed relief to hard-pressed families.

There are other big policy questions on the agenda – housing, medical cards and the like – but the bottom line remains that relentless pressure on income lay behind the crippling wound the party suffered last Friday. Emphasis on that front might well appeal to the Labour activists who will vote for the new leader. But meaningful progress in the next budget will be exceedingly difficult to attain, even if Fine Gael wants to achieve much the same thing.

If the original plan of action in Government was to maintain fiscal momentum all the way until a maximum dispersal of relief in a pre-election budget in October 2015, that has long since fallen by the wayside.

The push now is to ease off in the budget in October, even if there is no reversal of the new water tax .

Here is the dilemma: the Government is required under EU agreements to bring the budget deficit below 3 per cent next year. Although economists differ as to how much further retrenchment is required, the official target is still €2 billion. That looks next to impossible in the aftermath of the drubbing meted out to Labour and Fine Gael last week, but further cuts will still be required to tame the deficit.

Water tax Although the Economic and Social Research Institute has said €500 million in proceeds from the water tax may suffice next year, the Organisation for Economic Cooperation and Development has warned €2 billion may not do the deed.

While the eventual parameters will be subject to negotiation between the new Labour leader and Kenny, the net point remains that room for fiscal manoeuvre is severely curtailed and will be for years to come.

The hands of Gilmore’s successor will still be tightly bound, even if increased employment eases a little of the pressure on the public finances. The ultimate question is whether Gilmore’s successor can match the competing demands of the activists and TDs who elect them and the financial strictures within which the Coalition operate.

It is as well to point out that there is no appetite whatever at the apex of Fine Gael to resile from the deficit-cutting path followed by both parties since they took office. Remember too that Burton, one of the prime contenders for the leadership, has set her face against any further welfare or education cuts. This went down very badly in Fine Gael circles.

If the Coalition is to survive, then the policy demands of the new Labour leader will have to be calibrated very carefully.

Fine Gael will have its own competing demands whenever the Programme for Government is reopened. Even if a workable pact is sealed, the fundamental dynamic in the Coalition is changed forever.

Gilmore and Kenny had a solid working relationship. The Taoiseach must hope for the same with the new tánaiste.