Will Shatter pay the penalty for hypocrisy?

Analysis: Minister for Justice Alan Shatter indulged in Grade-A political hypocrisy in the course of a debate with Independent TD Mick Wallace on penalty points 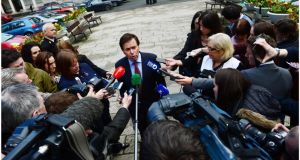 The word hypocrisy has been bandied around in the continuing row over penalty points. It has been applied (correctly) to Roscommon Deputy Luke Ming Flanagan for seeking to have his own points quashed despite raging against points being quashed for others.

Yesterday, Taoiseach Enda Kenny used the word (less convincingly) against Wexford TD Mick Wallace whom he claimed had been a hypocrite in benefiting from the system he had described as corrupt.

But on that very same political yardstick his Fine Gael colleague, Minister for Justice Alan Shatter, himself indulged in Grade-A political hypocrisy in the course of a debate with Wallace on RTÉ’s Prime Time on Thursday night.

Shatter disclosed that Wallace had been stopped by a garda last May while using a mobile phone while driving but had been let off with a warning.

When, predictably, a massive political row erupted, Shatter stoutly defended his decision on grounds of public interest. In a statement he said “Deputy Wallace . . . has been using confidential information to denigrate and attempt to damage the reputations of a number of private individuals.”

But was not the Minister resorting to the same tactic, using confidential information to smear a political opponent?

The remark has had a political impact far beyond its seemingly throwaway nature. It has raised serious issue surrounding ministerial power, rights and responsibilities. Where and how did the Minister obtain the information? Did he breach data protection legislation? Was it appropriate to release such information? Have files been opened on other politicians?

Yesterday the constitutional lawyer Prof William Binchy deftly summarised the concern: “The idea that . . . the Minister for Justice should be in a position to trawl though all the information available to gardaí in order to find dirt on a political opponent would be a very frightening vista,” he told RTE’s The Week in Politics .

The Opposition has reacted strongly. Wallace is to lodge a complaint with the Standards in Public Office Commission. Fianna Fáil’s justice spokesman Niall Collins has called on Shatter to resign.

Shatter’s response to that was: “Are you joking?”. This was followed by an uncharacteristic silence for the rest of the weekend. His Fine Gael colleagues, from the Taoiseach to Richard Bruton, have defended him to the hilt.

Their defence has included deliberate muddying of the waters. Unlike Ming Flanagan, Wallace did not have penalty points quashed. The Wexford TD never had an issue with gardaí using professional discretion when stopping a driver. So the charge of hypocrisy does not stack up.