Who is on committee examining future of water charges? 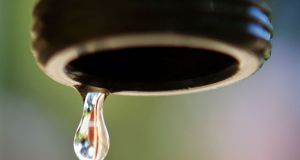 Water committee: its key test will be whether its recommendations will be in keeping with the EU water framework directive. Photograph: Ian Waldie/Bloomberg

Twenty Oireachtas members will sit on the committee examining the future of water charges.

The committee, which will be chaired by Independent Senator Pádraig Ó Céidigh, is due to meet for the first time next Tuesday to consider how it will conduct its work.

One of the key issues will be whether it will invite witnesses to give evidence or simply consider the report’s recommendations.

It has a number of questions to examine, including whether water services will be funded by a new tax or by adjusting existing taxes.

Another is whether it will allow the Commission of Energy Regulation determine the daily allowance for households.

The key test for the committee will be whether its recommendations will be in keeping with the European Union water framework directive.

The committee will have three months to reach a final conclusion and its recommendations will be sent to the Dáil for a vote.

Nine of the 20 TDs on the committee are in favour of water charges, five support outright abolition and the five Fianna Fáil TDs will not adopt a final position until after the committee concludes its work.

The other member is the chair, who has been meeting with individual members over the past two days to seek consensus on how the committee will work.

POSITION: The party is in favour of water charges

POSITION: Water charges should be abolished and services should be funded through general taxation

POSITION: Social Democrats are in favour of abolition, while the Green Party advocates in favour of water charges.

MEMBERS: 2 - Senator chosen by the Seanad

POSITION: Majority in favour of retention of water charges