What – if anything – would satisfy the DUP in Brexit negotiations? 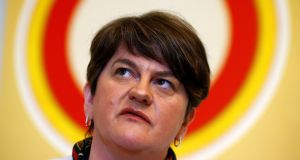 The Huffington Post reported on Thursday that Jeremy Corbyn’s Labour Party was in talks with the DUP “at a senior level” to try to find “common ground” on the way forward.

Such a scenario would seem to border on the incredible given that Corbyn’s friendship with Gerry Adams and Sinn Féin and his support for a united Ireland are well known.

The DUP said its MPs were “talking to people on all sides of the House” of Commons but that its current focus was on urging the British prime minister to convince the European Union to change the terms of the UK-EU withdrawal agreement to get rid of the backstop in its current form.

The DUP, the party added, “would not support a no-confidence motion” in the British government when Theresa May is involved in lobbying the EU to alter the withdrawal agreement.

But equally the DUP is not ruling anything out. Arlene Foster and Nigel Dodds and Sammy Wilson are playing a very tough tactical game at the moment to force the abandonment or emasculation of the backstop in the withdrawal agreement designed to ensure a soft North-South border post Brexit.

One senior party source reflected that hard-ball negotiating attitude when it was put to him that surely the DUP would never do anything that would see Jeremy Corbyn in charge of deciding the future of the “precious union”.

The same source was equally confident that in any general election it would at least hold its 10 seats, again notwithstanding the support for the withdrawal agreement from the business, farming and voluntary sectors of Northern Ireland.

But when the Ulster Farmers’ Union (UFU), normally so sympathetic to the DUP, comes out in favour of the withdrawal agreement surely the party should have concerns?

The source wasn’t impressed with this argument. He said at the winter fair in Lisburn on Thursday a steady stream of farmers made it known to DUP MEP Diana Dodds at the party stand that it opposed what the leadership of the UFU was saying.

He was conscious too of a widespread contention that the DUP just “don’t get” how serious are the stakes here. But he felt that those same people “don’t get” how unionists react when there is a perceived threat to the union.

And the backstop requiring a border down the Irish Sea was a threat, he was 100 per cent certain, again notwithstanding Irish, British and EU commitments to the consent principle of the Belfast Agreement where change in the constitutional status of Northern Ireland only could be effected through a majority vote of the people of the North.

He asserted, “If Theresa May tries to railroad through a withdrawal agreement against our will then we would have to review the confidence-and-supply agreement, and she can’t get the agreement through without our votes.”

That was putting it up to Theresa May to extract a new deal from Brussels, regardless of the fact that the word so far from the EU is that while there can be assurances that it is unlikely the backstop ever will be used, there can be no legal changes to the agreement.

The DUP wants more, however, and, it was clear from this source, it was prepared to exert the gravest of threats to try to achieve that objective. One idea, he said, that could be tried would be the removal of the backstop and a legally binding addition to the withdrawal agreement stating that under no circumstances would there be a hard border between the North and South.

The same source was conscious that many people in Dublin, Belfast, Brussels and London believed that the DUP was shooting itself so many times in the foot that it was running out of foot, and that ultimately rather than safeguarding the union, it was undermining that which it asserts to love and cherish.

He was aware too of the ridicule and lampooning of the likes of Foster and Dodds on social and other media. “We don’t worry, Arlene and Nigel are thick-skinned, and anyway we are getting our message across to MPs in the House of Commons.”

And while the source did not put it like this it was implicit that he felt that people appalled, bemused or shocked by the DUP tactics failed to understand that when unionists say “not an inch” that is precisely what they mean.

“This is not about us being uber unionists,” said the well-placed source seeking to promote some understanding of the DUP position. “But this is about the union, and once you start threatening the union it is a very serious thing to do. And remember every single unionist party is on the same page as us.”