Water referendum would be under way if there was consensus, Dáil hears 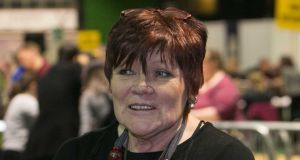 Joan Collins said there were probably about 40 Dáil days left before the next election and people were very concerned about privatisation. Dublin. Photograph: Gareth Chaney/ Collins

Legislation to allow a referendum on keeping water in public ownership would have already passed if there was consensus across the Dáil on the issue, the Minister for Social Protection has said.

Regina Doherty made the claim amid heated exchanges after Independent TD Joan Collins said her Bill had been “trapped in committee for three years”.

Hitting out at Minister for Local Government Eoghan Murphy who has responsibility for the issue Ms Collins claimed he “does not have the guts to come into the committee Dáil and argue and vote against the Bill”.

Ms Collins claimed the Minister wanted to bury the Bill in committee.

She insisted that delaying the 35th Amendment of the Constitution (Water in Public Ownership) (No 2) Bill leaves open “the possibility of privatising our water services at some time in the future”.

But replying for the Government Ms Doherty dismissed her claim and said “the mantra of a lot of people was so that we could privatise it was an absolute myth and never borne out by anything close to reality”.

She acknowledged that the “ship had sailed” on the previous government’s attempt to introduce “a consistent funding stream” through water charges.

But Ms Doherty, who said she did not personally agree with Ms Collins’ view added that “we are a minority Government and if there was consensus among everybody else to do what you’re wanting to do your Bill would already be passed and we wouldn’t be having this discussion”.

However, warning that she would not allow the Mr Murphy to bury the Bill Ms Collins said the Minister promised in July that he would have promised Government amendments to the legislation by the autumn.

“This is yet another disgraceful example of the disregard for basic democracy and the decision of elected representatives of the people,” she said.

Ms Collins said there were probably about 40 Dáil days left before the next election and people were very concerned about privatisation.

The reason they stopped the installation of meters during the campaign against water charges was because of the “deep understanding” that every meter installed was “another step towards privatisation”.

She said local authority workers, the Future Funding of Public Water Services Committee and the Irish Congress of Trade Unions were among those supporting the referendum.

Ms Collins added that “there is no opposition to this on paper”.

But Ms Doherty was heckled when she reiterated that “If you had consensus for your view we wouldn’t be in the position we are in”.

She asked TDs “do you want me to answer or do you want to have a little blather among yourselves”.

Ms Doherty said she would pass Ms Collins’ concerns to the Minister who she had no doubt was working with the Attorney General on the issue.