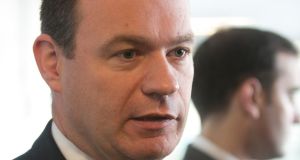 Minister for the Environment Alan Kelly. Under the proposals single-person households are to be levied at rate of about €100 per year. Photograph: Gareth Chaney Collins

The Government is close to finalising a much simplified system of water charges which will mean an effective annual charge of less than €200 per household.

The Coalition parties are hoping the package with significantly reduced charges will be enough to encourage a majority of households in the State to register with Irish Water and end the ongoing crisis.

The revised plan will see the discarding of multiple tiers of charges based on the number of adults in a household. It will also replace three separate water allowances with a single universal allowance.

Under the scheme, every household which registers with Irish Water and gives details to the Department of Social Protection will be entitled to an annual allowance of some €100.

The single allowance will be available to all households irrespective of means. It will replace the tax concession included in the budget, and other allowances announced as part of the social welfare package.

There will also be a simpler charging model, based on only two rates. The first rate will be for a single-adult household and the second for a household of two adults or more.

When the universal allowance is taken into account, it will mean the annual bill for households with two children will be substantially less than €200, and single households will pay less than €100 per annum.

The plan is being drawn up by Minister for the Environment Alan Kelly ahead of an expected announcement on Wednesday.

Senior Government sources last night confirmed the broad details of the plan, which is nearing completion. It should be signed off by Government after meetings of Cabinet and the Economic Management Council early next week.

The initial system approved by the Commission for Energy Regulation proposed charges of €176 for a single-adult household; €278 for a household with two adults; and further charges of €102 for each subsequent adult. It meant a household with two parents and three children over 18 would face an annual charge of €584. It is expected that the new rates will be close to the two lower rates.

The Department of Social Protection will have responsibility for administering the allowance system. Ervia, the parent of Irish Water and Bord Gáis networks, is also to be brought under one new board. Mr Kelly is expected to announce next week that he is starting a process to appoint a new board.

The Government will need to ensure the total amount of money being collected does not fall below the threshold where it is considered state aid and would have to be brought back on to the State balance sheet.

Referring to the expected proposals yesterday, Taoiseach Enda Kenny said the Government had “listened very carefully to the concerns and anxieties of the people.”