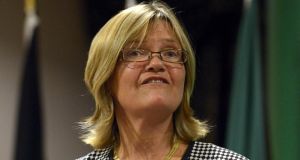 The Fianna Fáil U-turn on water charges has the capacity to undermine all of the hard work that made the economic recovery possible, political scientist Dr Brigid Laffan has said. Photograph: Brenda Fitzsimons/The Irish Times.

The Fianna Fáil U-turn on water charges has the capacity to undermine all of the hard work that made the economic recovery possible, political scientist Dr Brigid Laffan has said.

Delivering the Garret FitzGerald Memorial lecture on Wednesday night, Dr Laffan argued that the State was not left wanting in hard times when a relatively small cadre of politicians and public servants found the political and institutional capacity to address major problems, and bring Ireland back from the brink.

However, she suggested there were some signs that the lessons from the “bad times” had not been learned and the political system did not appear to have developed sufficient capacity to guard against the pathologies of the past.

Dr Laffan, the director of the Robert Schuman Centre for Advanced Studies at the European University Institute in Florence, argued that the policy outcome on Irish Water will be an acid test of the so-called “new politics” and there were reasons for serious worry on that score.

“The political U-turns on this issue highlight the ease and dangers of populist politics: The political chain is easily identified. Paul Murphy frightened Sinn Féin and in turn Sinn Féin frightened Fianna Fáil,” she said.

“The evolving FF policy is the most worrying of all. Having argued for a suspension of charges, the party has apparently moved to support their abolition. It should remind us of the abolition of domestic rates in the late 1970s rather than their reform.”

“Abolishing rather than reforming rates was a very poor policy choice back then and the abolition of water charges would be a very poor choice now. Its long-term effects would be incalculable. Literally it could kill people or at least make them very sick if they do not have clean and safe water. In the past, funding water through general taxation failed through neglect. Why should we think it would be different in future?”

Dr Laffan said Fianna Fáil had been a remarkably successful political party by international standards and while the 2011 election defeat was traumatic, the party had survived.

“But how much has it learnt? History will not be kind to the successive Fianna Fáil governments of the 2000s that bear a heavy responsibility for the vulnerabilities and risks that were taken with the wellbeing of this country. The excesses they encouraged during the Tiger years did extraordinary damage to Irish society. That instinct and desire for power, so deep in its DNA, may not have been tamed sufficiently,” she said.

“The evolving FF policy on water charges should be severely tested and contested as it appears to want to trump for what it thinks is the popular policy at the cost of doing what is right.”

She said that if water charges were abolished, it would represent a victory of a vocal minority not a majority. “Just before the election 63 per cent of those covered were signed up to pay. This is a majority.

“People may not have liked another charge in tough times, but would pay water charges in return for a good infrastructure that is properly maintained. What is happening is a case of those who shout loudest getting their way. That is a democratic deficit.”

Dr Laffan said the idea being peddled by anti-water charge politicians that the people voted to get rid of water charges was a complete lie and should be challenged.

“What message does abolition send out to those who paid what they owe to the State? No state should lightly favour those who don’t pay over those who have paid. This will leave a very nasty taste and legacy.”

She also pointed out that the abolition of charges would embroil the country in another very big fight with the European Commission at a time when it has major issues on corporation tax.

Summer is on the way with warm sunny conditions for most of the next week 09:40
Covid-19: Public sector workers at home may be asked to foster children 09:34
Aaron Brady trial: Jury continues deliberations 08:50
‘We need action now’: Staycations cause surge in illegal dumping 08:32
Gove announces £650m Brexit support package for the North 07:38

1 Coronavirus: ‘Midlands lockdown’ on the cards following surge in cases in Kildare, Laois and Offaly
2 Ireland's 'R number' of almost 2 a 'serious concern' as number of new cases jumps
3 Micheál Martin: Be wary of thinking virus can be governed, it ‘will come back to bite us’
4 Masks Q&A: Who has to wear them in shops and what happens if you don’t?
5 How a ship abandoned by its owner brought deadly cargo to Beirut
Real news has value SUBSCRIBE