Water charge cap has changed some minds, but 33% still say they won’t pay 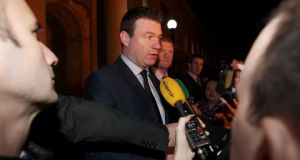 Minister for the Environment, Alan Kelly, at a press conference in Government buildings outlining the revised water charges. Photograph: Collins

The capping of water charges announced by the Government after months of controversy has persuaded some householders to change their minds about paying, according to the latest Irish Times/Ipsos MRBI poll.

When asked if their households had intended to pay the charges before the cap was announced, 42 per cent said yes and 40 per cent said no.

The Government climbdown on the issue prompted 13 per cent of people to switch into the paying category, but 5 per cent of those who had intended to pay went the other way as a result of the change.

The strongest opposition to paying comes at the other end of the social scale: 40 per cent of the poorest DE voters say they will pay and 42 per cent say they will not.

Asked if they had personally protested against water charges, a surprisingly large 22 per cent said they had. The figure rose to 31 per cent in Dublin and dropped to 12 per cent in Connacht-Ulster, with the other regions coming in between.

As with the numbers of those who intend to pay, people in the DE social category and those renting were far more likely than average to say they had taken part in a protest.

When voters were asked whether they thought the protest against Joan Burton in Jobstown in November was peaceful or not, a substantial majority said it was not.

Just 24 per cent of respondents said the protest was peaceful; 60 per cent said that it was not. Another 11 per cent had no opinion and 5 per cent were unaware of the protest.

People in the poorer social categories were a little more inclined to say it was peaceful than those who are better off, but the variation in opinion was not very significant.

In age terms, the over 65s were more inclined to say the protest was not peaceful than those in the younger age categories.