Vote on abortion ‘likely early next term’, if Labour in power 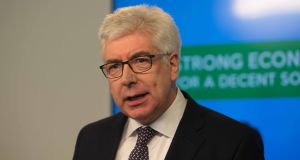 A referendum on the repeal of the Eighth Amendment to the Constitution, which gives equal right to life to a mother and her unborn child, is likely to happen early in the next government’s term if Labour is in power, the party has claimed.

The junior Coalition partner on Thursday launched its plan to hold a referendum on the issue, and Minister for Communications Alex White claimed only Labour could deliver such a poll.

Mr White, standing in Dublin Rathdown, said “no other major political party or grouping will deliver this referendum” but declined to put an exact timeline on when any referendum will take place.

Labour has already indicated it would insist on a referendum as a prerequisite to re-entering coalition with Fine Gael.

Fine Gael’s manifesto only commits to a citizens’ assembly to examine the Eighth Amendment, and Taoiseach Enda Kenny said this would be established within six months of a Fine Gael-led government taking office.

Sinn Féin would not be in government unless Gerry Adams is Taoiseach he said, claiming that although the party wanted a referendum, it will effectively be irrelevant in Opposition.

Mr White, however, said a referendum will not be delivered by issuing “ultimatums” on when one should take place.

“We’re often asked about red lines and deadlines and ultimatums,” he said. “We’re an experienced political party and our track record is there to demonstrate that.

“Certainly we will deliver this in the early part of the next government, in my view. If this Government is returned to office, which I think it will, that [Fine Gael citizens’ assembly] would be well under way by the summer.

“There definitely needs to be a referendum and we don’t have any difficulty with a process that builds consensus in order to achieve that referendum but a referendum we believe there must be.”

Aodhán O’Ríordáin, a junior Minister and TD for Dublin Bay North, said: “It’s not just about bringing a political party with you, it’s about bringing the people of Ireland with you.”

The Labour Party proposes to legislate so that a “new medical and legal framework” will address the concerns around abortion.

This framework will “recognise the importance of sustaining embryonic and foetal life” while allowing for abortion in cases of fatal foetal abnormality; if there is a “real and substantial risk” to the physical or mental health of the mother in the early stages of pregnancy; a risk of “severe or disabling damage” to the mother’s health in the later stages of pregnancy; and in cases of rape, incest or serious sexual assault.

Party senator Ivana Bacik, who drafted the Labour policy on abortion, said it will “absolutely not” lead to abortion on request. Ms Bacik said the Labour proposals are broadly in line with standards that apply in England and meet “the needs of the thousands of women who travel” from Ireland every year for abortions.