Varadkar will stay on as Minister if given ‘authority and resources’ 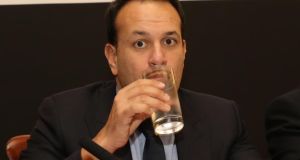 Minister for Health Leo Varadkar has indicated he will only remain in the department after the election if given the “authority and resources” required.

In a radio interview on Sunday, Mr Varadkar defended his performance as Minister for Health, despite impending nurses’ strikes and overcrowding in hospitals.

Speaking on Newstalk, he said: “I don’t pretend there isn’t a problem.

“I accept that overcrowding is unacceptable, indefensible and it is going on for too long, and when you do that and you call it as it is you get criticised for being a commentator.”

Mr Varadkar said he had taken efforts to tackle these issues, including the opening of beds and establishing a taskforce examining the problems.

Asked if he wanted to remain as Minister for Health after the general election, Mr Varadkar said: “If I am given the opportunity I would be happy to be re-appointed, but I would want to have both resources and authority to make the decisions that need to made and that isn’t always the case as a line minister.”

In the interview Mr Varadkar also said he was not in favour of deleting the Eighth Amendment, which bans abortion, from the Constitution.

The Eighth Amendment gives equal right to life to the mother and her unborn child.

Mr Varadkar said removing the amendment would give the Dáil and the Seanad the freedom to legislate for abortion at any time.

However, he said he believes the current legislation is too restrictive and abortion should be allowed in certain circumstances.

Taoiseach Enda Kenny has committed to a constitutional review of the Eighth Amendment within six months of the general election if Fine Gael is returned to government.

The Taoiseach said a citizens’ forum to debate changes to the Eighth Amendment will be established to examine the issue.

The Taoiseach has committed to a free Dáil vote for Fine Gael TDs on the outcome of the forum.

Mr Kenny said members of Fine Gael will be allowed to vote with their conscience on the issue, regardless of whether they are in Government or not.

He said: “If it comes to a point where there is an issue to be decided by vote . . . members of my party would have a free vote and that applies whether they are in government or not in government as ministers.”