Tánaiste Leo Varadkar has warned that 2,000 people per day could be testing positive for Covid-19 by the end of December should current infection trajectories go unchecked. Video: RTÉ 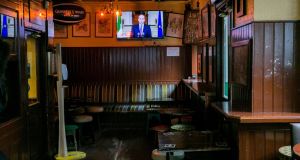 Taoiseach Micheal Martin on television in a city centre pub during an address to the nation about imminent increased restrictions. Photograph: Gareth Chaney/Collins

The State will enter its third lockdown on Thursday, Christmas Eve, as a range of restrictions take effect between then and the new year in an attempt to control surging levels of Covid-19 infections.

Taoiseach Micheál Martin announced the restrictions yesterday in a televised address from the steps of Government Buildings after Cabinet approved the measures.

Later Tánaiste Leo Varadkar said that although the decisions would be reviewed in mid-January, people could expect the lockdown to last until early March.

There were another 970 new cases of the virus recorded on Wednesday, and a further 13 deaths.

As expected, bars and restaurants will shut from Thursday, as will hairdressers and beauty salons. The Government pledged that schools and creches would reopen as planned after Christmas, and retail outlets will be permitted to remain open, though will be told not to hold post-Christmas or January sales. Gyms, leisure centres and swimming pools will remain open, and outdoor training can continue. But no sports matches can take place apart from those at elite level.

Travel between counties will be banned from St Stephen’s Day, but people who have already travelled for Christmas will not be asked to return home. However, once they return home after their visit, no new inter-county travel can take place. Home visits by members of two households can continue until December 26th, but will then be reduced to just one household. After January 1st, home visits will be banned completely.

Christmas religious services can take place, but services will move online after December 25th. Churches will remain open for private prayer. Travel restrictions from Britain will remain in place until at least December 31st.

Privately, senior Government figures expect a dramatic increase in cases of the virus over the coming days.

Mr Varadkar said there was “exponential growth” in the numbers of people infected with the virus, which would “on its current trajectory” see case numbers at 1,000 a day before Christmas and “perhaps 2,000 a day before New Year’s Eve”.

Announcing last night’s figures for new infections, chief medical officer Dr Tony Holohan called on people to rethink their Christmas plans following the “extraordinary growth” in the spread of the Covid-19 virus over the past five days.

Also on Tuesday, the Government announced it had updated its advice for people who have travelled from Britain to Ireland since December 8th. The new advice calls on people to self-isolate in their room rather than restricting their movements from the date of arrival into Ireland for 14 days.

This includes people who have had a negative test, the HSE said, as these people could still be developing symptoms and pose a potential risk to others.

Some 10,000 doses of Covid-19 vaccine will arrive in the State in coming days, with the first vaccinations expected to take place on December 30th.

The Taoiseach said the State’s Covid-19 vaccine programme could be “substantially” completed by autumn, allowing the economy to begin returning to normal.

In Northern Ireland a further 439 people tested positive for the virus, the Department of Health said, with 16 more deaths.

The Executive has issued guidance advising against all but essential travel between the North and the Republic, and between Britain and Northern Ireland, amid concerns over the new strain of Covid-19 in England that led dozens of countries to close their borders to arrivals from the UK.