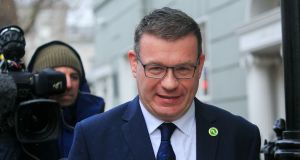 Four years after declaring that his lifetime ambition was to lead the Labour Party, Tipperary TD Alan Kelly has finally realised those dreams.

He succeeds Brendan Howlin to become the party’s 13th leader after a failed bid in 2016. His short-lived campaign at that time saw him buoyantly reveal his plans to Ryan Tubridy on The Late Late Show only to be left disappointed by the parliamentary party’s decision to elect Mr Howlin unopposed.

In summer 2018, there were rumblings about Mr Howlin’s leadership among the grassroots of the party. In an interview with local radio, Mr Kelly said the Wexford TD had failed to turn the ship around. But again, it was not to be.

For some time it looked as though Mr Kelly would be further isolated among his colleagues, who viewed his comments as a distraction.

In the intervening period he has changed tack and placed his focus squarely on the health system and on justice issues, becoming one of the most outspoken critics of the Government’s handling of both the CervicalCheck crisis and the overspend at the national children’s hospital.

Following another disappointing general election in February, Mr Howlin announced that he was stepping down.

This time around, Mr Kelly cut a more reserved figure as he launched his campaign. Appearing to be somewhat emotional in Buswells Hotel, he talked about being humbled by the evident support of his colleagues. He also laughed off questions about whether he still believed that power was a drug, a reference to one of his more eye-catching past interview quotes.

Mr Kelly is often referred to by his nickname “AK47”, thanks to his quick temper and combative manner.

In his time as minister for the environment, his quarrelsome ways with civil servants became the subject of gossip in political circles.

And in his role on both the Public Accounts Committee and Oireachtas Committee on Health he developed a reputation for being a scrappy and forensic questioner.

Mr Kelly, who is from Portroe in Co Tipperary, served as a member of the European Parliament for the South constituency from 2009 to 2011 and a senator for the agricultural panel from 2007 to 2009. He was also minister of state for public and commuter transport from 2011 to 2014 and served as deputy leader of the Labour Party from 2014 to 2016.

In his earlier years he was very involved in youth politics and became chairman of Labour Youth in 2000. He is married to Regina O’Connor, a teacher, with whom he has two children. The first major question he will have to address as leader is a significant one: will the Labour Party enter government formation talks with Fine Gael and Fianna Fáil at a time when the country faces an economic and public health catastrophe. His decision could change the course of the party’s future.