Union joins up with GetThere.ie to help voters get home for marriage referendum 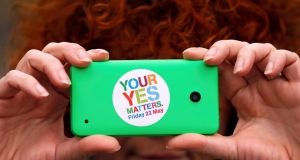 The Union of Students in Ireland (USI) has joined up with GetThere.ie to create #votermotor to help all registered voters get home to vote this Friday. Photograph: Cathal McNaughton/Reuters

Voters who are worried about making the journey to the polling station to vote in this Friday’s marriage referendum can put their minds at ease with the latest trend on Twitter - #votermotor.

The Union of Students in Ireland (USI) has joined up with GetThere.ie to create the #votermotor campaign to help all registered voters get home to vote this Friday.

The hashtag aims to match up voters with their best travel option, whether that is by train, by bus or through a lift-sharing system.

Laura Harmon, president of the USI, said nearly 28,000 students registered to vote in this Friday’s referendum through the organisation and that she is expecting a strong turnout.

“Students were coming to us saying they really wanted to vote, they had huge enthusiasm to get on the register,” said Ms Harmon.

“Given the level of activity, the fact that students are out canvassing with local groups, all signs are pointing to a higher student turnout than in recent years. I would be confident it will be higher than any referendums in the last number of years.”

A number of Irish universities have rescheduled summer exams to enable students to cast their vote.

“DCU rescheduled its exams, CIT in Cork decided to move exams from Friday and most exams in Maynooth have been moved. Trinity have their last exams this week so they’ll be finished up.”

Ms Harmon said she hopes #votermotor will help all voters, young and old, reach the polling station before 10pm on Friday.

She said there has already been interest from voters across the State in using the hashtag and the USI dedicated site to set up carshares and organise bus and rail tickets for referendum day.

“We’re talking about people everywhere, even students studying at Queen’s University and the University of Ulster who need to get home.

“There’s one guy travelling all the way from DCU up to Donegal to cast his vote on Friday morning, before travelling back to Dublin that evening for an exam the following morning.”

Taxi companies Hailo and Uber have also come up with a cheap way to reach the polling booth, through their free taxi service on May 22nd.

The Hailo app is offering customers a free ride to the polling station between 11am and 4pm on Friday as part of their #DriveForEquality campaign, while Uber is advertising free trips from 7am-10pm.

Meanwhile, Irish nationals living abroad hoping to grab a last minute flight home to vote may have to consider swimming back as flights from the UK to the Republic continue to sell out.

According to the Ryanair website, flights from Gatwick, Luton and Stansted airports to Dublin and Shannon airports on Thursday and Friday are completely sold out, with only a handful of flights available from London to Cork and Knock airports.

Ryanair did not confirm whether the spike in numbers was directly connected to the large numbers of Irish travelling home to vote.

A statement from the airline said: “As Ireland’s biggest airline, offering the lowest fares, best service and biggest route network, our UK-Ireland flights are always full.”

Flights on Friday from London to Dublin with Aer Lingus were still available on Wednesday afternoon, for the small fortune of nearly €350 one-way.

A spokeswoman for the airline confirmed that flights from the UK to Ireland were heavily booked on Thursday and Friday, with some of the later flights on Thursday night completely booked out.

However, she also said it was impossible to attribute the large numbers of travellers to Friday’s referendum.

A spokesman for Irish Ferries said that there was no increase in the number of travellers making the journey from Holyhead to Dublin on Friday.