Use of inept language in Oireachtas anything but new

Confirmed tradition of foul, profane and inappropriate terms in Dáil and Seanad 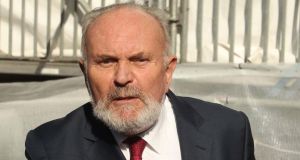 Senator David Norris is reported to have used the word “fanny” on several occasions in the Seanad since 2009. Photograph: Collins

There is a confirmed tradition of the use of foul, profane and inept language in the Dáil going back years, the latest of which is the use by People Before Profit TD Richard Boyd Barrett of the use of the term “bullshit” to describe a speech by Taoiseach Enda Kenny and Tánaiste Eamon Gilmore.

Ceann Comhairle Sean Barrett called an emergency meeting of the Dáil’s Committee on Procedure and Privileges last December following an incident in which Independent TD for Roscommon-South Leitrim Luke “Ming’’ Flanagan described water quality in his constituency as “glorified piss’’ and produced a glass of dirty water during the debate on the Water Services (No 2) Bill.

Meanwhile, Senator David Norris has used the word “fanny” on several occasions since 2009.

A word search on the KildareStreet.com website reveals that last July he slipped the word into the debate on the abolition of the Seanad while responding to Minister of State Brian Hayes.

Mr Hayes had said the proposed Bill was a “simple Bill”, to which Senator Norris responded: “He said it was a simple Bill. It is in its fanny a simple Bill.”

Sinn Féin’s Aengus O’Snodaigh told the Dáil in June 2010 the then-government had “fucked up the economy”.

In November 2009, in reference to the Eircom shares debacle, he said: “For the hundreds of thousands of people, including me, who gambled by purchasing Eircom shares and suffered the consequences, it was a case of hard luck. I did not cry out for the government to bail me out at the current market value, which was worth fuck-all at the time.”

Green Party TD Paul Gogarty infamously said to Labour TD Emmet Stagg during a debate on the Social Welfare and Pensions Bill in December 2009: “With all due respect, in the most unparliamentary language, fuck you Deputy Stagg. Fuck you.” He later apologised.

In May 2008, a spokesman for then taoiseach Brian Cowen denied he had been referring to Fine Gael when he used an expletive in an aside to then tánaiste Mary Coughlan following angry scenes in the Dáil.

Mr Cowen had clashed with Fine Gael leader Enda Kenny over the health service during Leaders’ Questions and later with Labour’s Eamon Gilmore.

As the chamber rose, Mr Cowen was picked up by the Dáil microphones swearing in a comment to Ms Coughlan: “Bring in those people and get a handle on it,” Mr Cowen can be heard saying. “You know all those fuckers”.

“The reference to ‘handbagging’ particularly with reference to a lady member of the House, has been deemed to be unparliamentary,” the document adds.