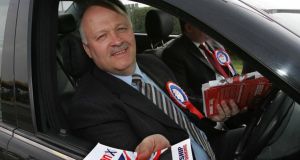 David Simpson (DUP) criticised what he described as a ‘ despicable’ attack on my family during the election campaign.

It was a campaign that “slumped to the gutter”, David Simpson declared as he retained his seat in Westminster.

Mr Simpson said it was a “fantastic victory” but had come after a seven-week attack on him and his family.

He said: “There has been a despicable, despicable attack on my family over the past seven weeks. It has been disgraceful, all the words I can use.”

Mr Simpson dded: “One of the sad things is that this campaign had to slump to the gutter. The truth really hurts.

“Nothing tonight that was said by the opposition can detract from the victory in Upper Bann and we are there for the next five years.”

The contest was tight with the result not becoming clear until after 1am.

Ms Dobson denied she had engaged in a dirty campaign and said she was proud of what the UUP had achieved.

She said: “I can look the people in this constituency in the eye and tell them we ran a purely positive campaign.

“We did not scaremonger, we did not feed on the politics of fear. The results are proven that the recent words (by Mr Simpson) are totally unfounded .

“People can cry wolf so many times before they are caught out.”

The seat has been a DUP one for the past ten years after Mr Simpson took the seat from former Ulster Unionist first minister David Trimble.

Mr Simpson had warned a vote for the UUP would be a vote for Sinn Fein.

Over 59 per cent of those eligible turned out to cast their vote in the election.

Speaking afterwards, Ms Seeley said a clear message had now been sent out that there was no such thing as a safe seat in Upper Bann.

She said her campaign had been a positive one and at no time did she or her team slur anyone.