Up to €10,000 a minute spent in Ireland on online gambling, Senate hears 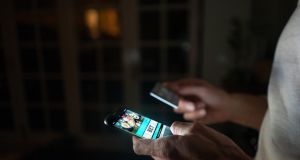 Senators warned every adult and teenager in the country is walking around ‘with a casino in their pocket’. Photograph: Getty Images

Renewed calls have been made for all sporting bodies to “reject the lure” of sponsorship from the gambling industry amid warnings that every adult and teenager in the country is walking around “with a casino in their pocket”.

Fianna Fáil Senator Shane Cassells said sporting organisations should not wait for the rollout of legislation to control the advertising of gambling before refusing such commercial funds from gambling companies.

Fine Gael Senator Joe O’Reilly said that up to €10,000 a minute is spent online on gambling in Ireland where there are at least 29,000 addicts.

He called for a €100 limit on all bets and that only debit cards should be allowed, pointing out that 77 per cent of betting company Paddy Power’s profits came from online gambling.

Mr Cassells told the Seanad he spoke on Thursday to Basketball Ireland chief executive Bernard O’Byrne who is “calling on his counterparts in all sporting bodies to lead the way on curbing the proliferation of sports betting advertising”.

“It might be enriching some sports bodies, but it is ruining the lives of their members and future generations because the firms know that’s where their target market is.”

Some years ago there was a move to put a casino in Tipperary and they “thought the place would be turned into Las Vegas.

“Now every teenager, and, indeed, adult, is walking around with a casino in their pocket.”

He said the mobile phone “is the greatest weapon that gambling firms have for targeting their addicts. Through the work of their social media teams, they have hooked people with targeted ads and fed their addiction.”

He added that “you can’t turn on a sports bulletin on Sky Sports without it being sponsored by a casino.

“My nine-year-old who wants to watch the sports news sees that, and so does every other child. The sports pages in our newspapers have banner ads for casino firms and social media is a free-for-all.”

“They suffer mood swings and depression. It leads to dishonest behaviour in people who are otherwise and secretive and evasive behaviour.”

Pointing out that up to €10,000 a minute is spent online he called for the €100 maximum bet with only debit cards to be used.

He also said there should be displays warning of problem gambling like the warnings against smoking cigarettes; and called for referrals to addiction services if a customer is very high on the list of big spenders.

“We are talking of tortured people,” he said and a radical plan was needed to address the issue.

Seanad leader Regina Doherty said that casino advertisements that used to be associated with very late night TV viewing “now seem to just be on our mainstream stations as if they are legitimate, attractive and something that should be part of the normal daily discourse”.