Unemployed: ‘Established party leaders have been exposed as spoofers’

Meet the Voters: ‘Labour and Fine Gael are promising 200,000 jobs, but what kind of jobs?’ 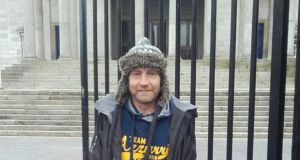 Kevin Flaherty: ‘I was glued to the debates. It was TV gold. I wish there were elections all the time.’

Kevin Flaherty has been unemployed since 2009 after the construction sector collapsed. He lives in Kilkenny and is concerned about job creation and housing. Read Kevin’s full profile here

I was glued to the debates. It was TV gold. I find the campaign so entertaining. I wish there were elections all the time.

Richard Boyd Barrett stole the show on Monday, and got a big cheer from the audience every time he spoke.

He is the most articulate of them. But what stood out for me, above the stronger performances, was how bad Enda Kenny and Joan Burton were.

We’ve seen them dodge questions for the past five years in the Dáil during leaders’ questions, but on a TV debate they had nowhere to hide.

To me, as someone who wants change, the debates were very refreshing. The established party leaders have been exposed as spoofers.

Boyd Barrett, Gerry Adams and Stephen Donnelly did a good job of pointing out how Enda and Joan have got their figures wrong.

It shows an arrogance from the established parties, that they think they can just throw out these fantasy figures and no one will check them. As far as I can see, Sinn Féin are the only ones who got their figures right.

When Gerry Adams spoke, the three main party leaders resorted to name-calling, because they are terrified of Sinn Féin getting into power. Micheal Martin is a very good public speaker, but I think he is also a spoofer.

I almost felt sorry for Joan Burton; it was like watching your own pet die in front of you.

Labour were my ideal party when I became interested in politics. We expected more from them, but they stuck a knife into the less well off over the past few years.

I don’t think any of the parties are coming across strongly on job creation. Labour and Fine Gael are promising 200,000 more jobs, but what kind of jobs are they going to be? I’m in the job centre in Kilkenny at the moment.

I’m down here every day looking for work and 70 per cent of the jobs on the wall are internships or community employment schemes.

I have a friend who has just returned to work, for 40 hours per week, and by the time he’s paid his rent, he is worse off than me. That’s not right, when I’m unemployed. Are the promised jobs going to be the same?

It’s the same with housing. There are no promises from FG or Labour. They want to leave things in the hands of private landlords and private developers. But we’ve seen that’s not working.

And they seem proud of their record, which is the amazing thing. People Before Profit and Sinn Féin have pledged to build a lot more social housing, which will put people back to work too. To me, that’s the only solution to the housing crisis.

I live in a flat on one of the main streets in the town so no one calls at my door, but I have been interacting with my local candidates on Facebook. People Before Profit candidate Adrienne Wallace is very approachable, I actually met her for coffee this week.

Keith Gilligan, who is running as an Independent, called me back when I had a query for him too. The other candidates are using social media to get their ideas out, but aren’t engaging with the public or responding to questions.

I’ll vote for Adrienne Wallace, Keith Gilligan and Kathleen Funchion of Sinn Féin - I’m just not sure who will get my number one.

Kevin Flaherty was in conversation with Ciara Kenny as part of The Irish Times Meet the Voters series, profiling 10 sample voters in a bid to track the impact of the 2016 General Election campaign on their voting intentions. Follow them at irishtimes.com/election-2016/meet-the-voters