Unborn killed in crash should be seen as individual - FF Senator 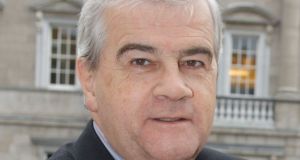 Senator Jim Walsh (FF): “In circumstances where a [deceased] baby like that has not been taken from the [late] mother during an autopsy, families might still wish to have that unborn baby recognised in its own right as an individual.’’

An unborn child who dies in a car crash should be recognised as an individual, Fianna Fáil Senator Jim Walsh has said.

He said an unborn baby who died with her mother in a car crash had been seven and a half months in gestation.

“In circumstances where a baby like that has not been taken from the mother during an autopsy, families might still wish to have that unborn baby recognised in its own right as an individual,’’ he said.

Mr Walsh, who is retiring, was making his final contribution to the Seanad, which later adjourned sine die. He is well-known for his anti-abortion stance.

He said the mother in the case in question had been driving the car on the correct side of the road when another car veered across and crashed into her vehicle. Unfortunately, she and her unborn baby were killed, he added.

He said the family was very anxious the unborn baby would be recognised as an individual.

Minister of State for Social Protection Kevin Humphries said the loss of a daughter or a grandchild was terrible for any family, particularly when a grandfather lost a granddaughter and daughter in one tragic incident.

He said he understood the issues in the case were the subject of High Court proceedings and would, therefore, be sub judice.

1 The view from Clondalkin: If Sinn Féin don’t get in, ‘there will be marches’
2 Ryanair’s Michael O’Leary under fire for comments on Muslim men
3 Founder of disabilities network with Irish centres sexually abused six women
4 Coronavirus in Europe: Two dead in Italy as fears grow that attempts to contain illness are failing
5 Drug dealer loses codes for €53.6m bitcoin accounts
Real news has value SUBSCRIBE