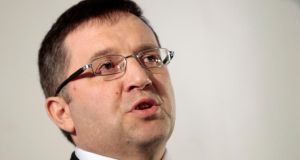 Ulster Unionist Party leader Robin Swann: ‘Leo Varadkar and Michel Barnier should go back to the negotiating table and respect and honour the principle of consent as it is actually written and not as they wish it was.’ Photograph: Peter Morrison/PA/File

Ulster Unionist Party (UUP) leader Robin Swann has said Northern Ireland will not be a dowry to the European Union for the delivery of Brexit.

Speaking at the UUP’s spring conference in Belfast on Saturday, Mr Swann told delegates the DUP’s “inept handling of Brexit right from before the referendum has now led us back to the Northern Ireland only backstop that they first missed in 2017 despite my warnings”.

The British government and the DUP have both rejected the EU’s suggestion on Friday that Britain could unilaterally exit the customs union as trying to “rerun old arguments”.

“I say to London, Brussels and Dublin that Northern Ireland will not be a dowry to the EU for the delivery of Brexit,” he said.

“And Leo Varadkar and Michel Barnier should go back to the negotiating table and respect and honour the principle of consent as it is actually written and not as they wish it was.”

Mr Swann again called for proper direct rule from London in the absence of devolved government at Stormont, which collapsed in January 2017.

He said Secretary of State Karen Bradley “is fine with direct rule when it suits”.

“Budgets passed, public appointments made and the Policing Board reconstituted,” she said.

“But nothing for those who are coming to harm as a result of the current political stalemate.”

The UUP was once the dominant political force in unionism but has been surpassed by the DUP in the years since the signing of the Good Friday Agreement.

The UUP is the North’s fourth largest party.

It has 10 MLAs and 84 councillors across 18 constituencies and 11 councils in the North.

It will be standing more than 117 candidates in the May 2nd council elections.

Mr Swann said the UUP’s brand of unionism was about “confidence and hope, not fear”.

“We will be offering unionism that is both accountable and responsible for their decisions,” he said.