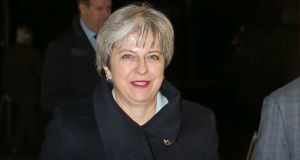 UK prime minister Theresa May: has said that, during the implementation period, people can expect things to be broadly similar to how they are now. Photograph: Steve Parsons/PA

The British government has played down the implications of a promise of “full alignment” of policies to support an all-island economy in Ireland if other ways of avoiding a hard border cannot be agreed.

The agreement between Britain and the European Commission says that in the absence of agreed solutions, the UK will maintain full alignment “with those rules of the internal market and the customs union which, now or in the future, support North-South co-operation, the all-island economy and the protection of the 1998 agreement”.

A senior official at the Department for Exiting the European Union in Westminster said on Friday that the commitment applies only to the six areas of North-South economic co-operation identified in the Belfast Agreement. These are transport, agriculture, education, health, environment and tourism.

He said that 142 cross-border policy areas identified by the Barnier task force were subsets of the original six, and insisted that the commitment did not undermine Britain’s declaration that it would leave the single market and the customs union.

“It’s the six areas. The 142 are a deeper dive across those six areas. The ambition at the moment clearly is to get cross-border trading arrangements to maintain the status quo as much as we can,” the official said. There are a very unique set of circumstances that apply to Ireland that don’t apply to anywhere else in the UK. But in terms of customs union and single market membership, the UK as a whole will be leaving,” the official said.

Former Brexit minister David Jones warned the promise of “full alignment” to avoid a hard border in Ireland could prevent Britain from signing free trade deals with other countries after Brexit.

“The worry about that, of course, is that that could well relate to very important areas such as, for example, agriculture, which we would want to throw into the mix in negotiating a free trade agreement with a third country. And if this were to persist, then it could severely handicap our ability to enter into those free trade agreements,” he told the BBC.

The deal has received a broadly positive response from across the political spectrum in Britain, with Brexiteers within prime minister Theresa May’s cabinet among the first to praise it.

Environment secretary Michael Gove described the agreement as a “significant personal achievement for the prime minister” and in the interests of the whole of the UK.

Downing Street said the divorce bill would be between £35 billion and £39 billion, a lower figure than some reports had predicted. And the government claimed it had won a good compromise over citizens’ rights, with a limited role for the European Court of Justice that would end after eight years.

Brexiteers in the Conservative Party expressed greater concern about the likely shape of a transition deal after Brexit, after European Council president Donald Tusk said Britain had asked for a transition of about two years, while remaining part of the single market and customs union.

Ms May’s official spokesman said that, although she wanted a standstill transition, it would be outside the European institutional framework.

“We are leaving the customs union and the single market in March 2019. The prime minister has also said that, during that implementation period, you can expect things to be broadly similar to how they are today. Precisely what that looks like is obviously a matter for negotiation. We are now moving towards the position where we will be having that negotiation,” he said.