Two out of five workers in Ireland reliant on ‘insecure contracts’ 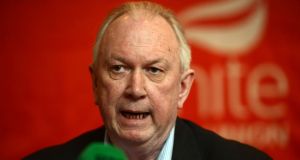 Jimmy Kelly of Unite says many employers see labour as “nothing more than a commodity, to be picked up and discarded as convenient”. Photograph: Cyril Byrne

Two out of every five workers in Ireland are reliant on insecure contracts, a conference heard today.

The secretary of the Unite Ireland trade union said we rank towards the bottom of a European league table when it comes to providing workers with secure employment.

“In the rest of the EU, 80 per cent of employees have permanent employment contracts. They can plan for the future of themselves and their families,” said Jimmy Kelly, Unite Ireland secretary said.

“In Ireland, that figure is just 61 per cent. Put another way, nearly two out of every five workers is reliant on fixed-term contracts, temporary agency contracts – or no contracts at all.”

He also said we have one of the highest level of under-employment - people working part-time, but who want to work longer - in the EU.

Mr Kelly said precarious work was not an inevitable result of a market economy, but an instrument for many employers who view labour as “nothing more than a commodity, to be picked up and discarded as convenient”.

He added: “The result is that workers are pitted against workers in labour market which is dragging down terms and conditions – creating a race to the bottom for which we all pay. Precarious work is a drain on our society and economy.”

Esther Lynch, campaigns director of the Irish Congress of Trade Unions, said there was such an imbalance in the bargaining power of workers in some sectors that employers knew they could offer terms and conditions on a “take it or leave it basis”.

“What these jobs have in common is a combination of unfair terms inserted into the employment contract,” she said.

“One of the strategies we are discussing is the role of law in addressing the imbalance by supporting workers to organise in unions and by making unfair terms, such as zero hours practices, unlawful in employment contracts.”

The problem was expanding in Ireland before the economic crisis, he said, in common with other countries such as the US and UK.

“Many jobs combine low pay with limited or irregular hours. So just raising the minimum hourly wage doesn’t fully tackle the problem of low pay. It is no longer true that any job is better than no job at all.,” he said.

For most people, he said, work still was important to their identity and their sense of self-worth. But many employers are increasingly organising work in ways that “destroy” this.

“Decent work is only ensured if employment is properly regulated and if trade unions are strong enough to restrain employers”, Prof Wickham added.