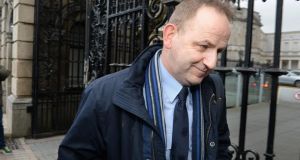 Sgt Maurice McCabe arriving at the Dáil to give evidence to the Public Account Committee yesterday. Photograph: Cyril Byrne

Twelve allegations of garda corruption or malpractice were made to a confidential complaints system for members of the Garda Síochána during the first five years of its operation, new figures reveal.

The details of how the confidential system has been operating were revealed yesterday as the Public Accounts Committee took the unprecedented step of hearing evidence from a Garda whistleblower.

Sgt Maurice McCabe, who wore his Garda uniform to the committee, spoke in a private, three-hour meeting about the controversy surrounding the use of garda discretion in cancelling penalty points. He had first brought his concerns about the matter to the “confidential recipient” in 2012.

At a previous hearing, Labour TD Gerald Nash and Sinn Féin TD Mary Lou McDonald asked Garda Commissioner Martin Callinan for details of the number of complaints made through this confidential process but Mr Callinan said it was a matter for Minister for Justice Alan Shatter.

The position of confidential recipient for the Garda Síochána came into operation in 2008, and the part-time holder of the post must be available to receive reports of alleged corruption or malpractice made by gardaí against others in the force.The confidential recipient must then make the Garda Commissioner aware of the reports, and the commissioner must give an annual update to the Minister.

“He stayed within the guidelines and he answered every question comprehensively and gave us a comprehensive insight into the operation of the system and the failings and faults in it as he found it.”

Before and after the hearing, Independent TD Shane Ross and Mary Lou McDonald of Sinn Féin asked if a transcript of the meeting could be disclosed afterwards.

Committee clerk Ted McEnery said none was permitted due to legal advice. A source close to Sgt McCabe last night said he would welcome the publication of the transcript of the hearing and that the garda was pleased that the committee considered him a credible witness.

According to committee members, Sgt McCabe informed them he had only collated information on “clusters” of people he suspected had their points quashed on numerous occasions.

He claimed this amounted to thousands of points being written off, and the lost revenue could have bought hundreds of Garda cars.

Sgt McCabe also claimed the quashing of fines had reduced from 2,000 a month to a “trickle” since the Comptroller & Auditor General had highlighted the issue on foot of his complaints.