Election 2016: The Labour mood in studio is almost of dazed bafflement 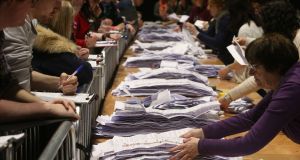 This is heart attack territory for broadcasters. Hours of reporting on nothing much. Hours of it. Photograph: Brian Lawless/PA Wire

Count day. Early morning. TV3’s Alan Cantwell: “We’re going to the Taoiseach’s constituency now... Morning Fergal. Any of the party hacks able to tell you anything?”

Michael Ring might top the poll over the Taoiseach, says Fergal. It may be related to Whingergate. So it might. And it might not. This is heart attack territory for broadcasters. Hours of reporting on nothing much. Hours of it.

RTÉ at least can worry away at its exit poll. That gets old very quickly. The tallies come to the rescue, in their usual unsatisfactory fashion. What price a tally in Kildare North in the absence of Naas, say ? Still, the sofa-bound perk up when words like “earthquake” and “volcanic” begin to pepper the talking-head exchanges.

But the challenge for the television broadcasters is the absence of visuals. On radio, Michael McDowell describes the campaign as a “flat tyre” and Alison O’Connor says Fine Gael should get a refund on their focus groups. But right now, there is true human drama evolving in heartsick political households all over the country. Public humiliation is only the half of it. Livelihoods are at risk; parliamentary assistants, constituency assistants, advisors and others, many will be out of a job in a few hours.

Today, said one reporter, “political careers will be made, dented and broken”.

Even Fianna Fáil’s Billy Kelleher, on the cusp of a fine day out for the party, describes himself as “anxious and nervous”. Fine Gael general secretary, Tom Curran, says politics is “a very human occupation” and cautions against dancing on political graves.

No wonder so many take a peek, then shy away from standing for election. Only those who have been through that grinder have any notion of its impact.

What we see on a day like this is a succession of candidates out on their feet and trying to hold on to a sliver of dignity. Labour’s Kevin Humphreys, looking exhausted, appears dutifully in the RTE studio but says wryly that he would prefer “to go home, go to bed and take two Solpadeine”. A hollow-eyed Eamon Ryan says it will be “tight - including for your own brother Miriam [Jim O’Callaghan, Fianna Fáil]... It’s a tough thing to run for election. A tough business on family particularly” .

Fine Gael minister and poll-topper Richard Bruton will make no predictions, only giving a hint of this uncharted territory by saying “there are transfers to be read that we’ve never seen before”. Pat Magnier, a former national organiser for Labour speaks wistfully of the Spring Tide and the Gilmore Gale and sighs, “there is no payback for doing the right thing”. Derek Keating, the first to concede, says “clearly the people on this occasion have decided not to acknowledge the work of the government over the last five years”.

The mood in studio among Labour in particular is almost of dazed bafflement . Pat Rabbitte says there was “no receptivity out there for Labour to explain its case”. Tom Curran agrees; no-one wanted to hear what they had to say.

On radio, a mischievous Cathal MacCoille wondered who came up with the slogan, “keep the recovery going” - which seemed a bit of a disaster in hindsight.

Later, Prime Time’s Katie Hannon puts that in context. “I don’t recall people recoiling in horror immediately when “let’s keep the recovery going” was rolled out. There wasn’t a sense of it being a terrible idea”.

Soon enough, the visuals begin to kick in - Shane Ross, the first to be elected, looking uncharacteristically modest in his south city redoubt, then the Healy Rae brothers, surveying their southern kingdom. “Some of the smart alecks above in Dublin might have been picking on me before, but they might have to pick through him first to get to me”, said Michael gleefully, gesturing at his brother, Danny. “We’ll always be true loyal to the people of Kerry...

As the cameras circled the country, even the shoulder lifts for the winners seemed less raucous. It felt like a new era in more ways than one. Slowly but surely, the softer, coded language of negotiation could be discerned in exchanges. To paraphrase Michael McGrath, it runs as follows : “We said stuff yes, but the people have now spoken... There’s an obligation on everyone to consider what the people have said”.

On this, Maireád McGuinness said it best. “Yes, the people have spoken. I’m not sure what they’ve said”.