Troubles never far from topic of Blair and Clinton talks

‘We’ve all taken our licks for Gerry’, Blair told by president regarding Disappeared 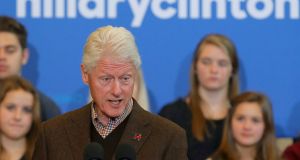 Former US president Bill Clinton: his intimacy with the Sinn Féin leader was such that Adams was almost always referred to by his first name, whereas David Trimble and Ian Paisley were called by their surnames. Photograph: Brian Snyder/Reuters

It was February 8th, 2000, and Tony Blair was on the phone to the White House, asking Bill Clinton to intervene yet again in Northern Ireland, this time over the decommissioning of IRA weapons.

“I’m sorry to lay this on you,” Blair said, after Clinton promised to get in touch with “Gerry and Martin” to see what was possible.

“No, no,” the president replied. “I think about this more than anything else, besides the screw-ups in the Middle East.”

Hundreds of pages of transcripts of conversations between the two leaders, released to the BBC under Freedom of Information legislation, testify to the truth of Clinton’s claim.

The transcripts begin within hours of Blair’s general election victory in May 1997 and continue until just before Clinton left office in January 2001. Northern Ireland features in almost every conversation.

Much of the time, Clinton was cajoling or pressing Gerry Adams into action, although he sometimes expressed frustration at the slow pace of Sinn Féin’s fulfilment of its commitments under the Good Friday Agreement.

The transcripts show Clinton advising Blair to treat the referendum on the Belfast Agreement like a general election and to put everything into personal campaigning for a Yes vote. When the referendum was won, Blair thanked the president for his advice.

Clinton was an early advocate for the families of the Disappeared, urging Blair to provide the legal safeguards that would allow the IRA to help them find the remains of their loved ones.

“We’ve all taken our licks for Gerry,” he told Blair on May 8th, 1998. “So if they want a role in the government, they have got to have some demonstration of good faith on this violence issue. These women gave me an idea yesterday. Your people could vet it for practicality. Maybe you and Bertie and I could ask for it.

“They say if there’s not immediate decommissioning, right after the vote, if you could work out the legalities so that people would not be prosecuted and the IRA could somehow direct people to the remains, so their families could give them a sanctified burial, that would have a huge psychological impact over there.”

“Imagine what their lives are like, a certain amount of romance, danger, drama, power,” he told Blair on July 16th, 1999. “You’re asking them to put a little white bread sandwich in a lunchbox and go off to work at the factory. It’ll be hard for them.

“I think it’s a big problem. It plays on their psychology. I just . . . I’ve been thinking a lot of what I’m going to do when I leave here, but – this may be a big postulate – but what if I had been a romantic terrorist, especially lately, when it wasn’t a lot of work and you didn’t have to set off more than one bomb every two years, you know?”