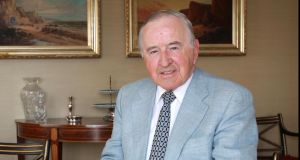 Tributes have been paid to former taoiseach and Fianna Fáil leader Albert Reynolds, who has died aged 81.

“And as a consequence made an important contribution to the development of the peace process which eventually lead to the Good Friday Agreement,” he said.

He said Albert Reynolds brought an energy and drive to the development of business and economic growth during his tenure in office as minister for industry and as minister for finance.

President Michael D Higgins said Mr Reynolds would be remembered as a “dynamic” minister and a taoiseach of “courage”.

“When I served in cabinet with him, I found him to be very supportive of many of the cultural initiatives which I introduced. I recall his great courtesy and relaxed manner in all our dealings on various issues,” he said.

“There were many, many cynics at the time who thought he was going down the wrong route and felt he was being overly optimistic,” he said.

“I think the key was the development of a very strong relationship, a personal relationship, with (then British prime minister) John Major.

“The trust that developed between the two of them I think was instrumental in bringing the British Irish governmental approach to the issue.

“It was key also in terms of reaching out to the republican movement and the loyalist movement.

“He had the capacity and personality to develop that trust between people who before that would not have engaged with Fianna Fáil leaders or a taoiseach in the Republic.”

Former taoiseach Bertie Ahern, who served as minister for finance under Mr Reynolds, said his role in the Downing Street Declaration was a critical point in the road to peace in Ireland.

“If there hadn’t have been a Downing Street Declaration, I don’t think there would have been a (IRA) ceasefire in the first place,” he said.

“That was carefully crafted. Albert put a huge amount of energy and commitment into that.” Mr Ahern said Mr Reynolds’s work had allowed successors to build on it towards a peace settlement.

“He had a great capacity to see a deal through to conclusion,” she said.

Ms McAleese described the former taoiseach as a “affable and honest” man and credited this entrepreneurial side to his ability to take risks.

Truly sad this morning to learn of passing of my former colleague and leader Albert Reynolds. A lovely man who made immense contribution.

She said his friendship with former British prime minister John Major “generated a new language” during the peace process.

Former taoiseach Brian Cowen said Mr Reynolds was a close personal friend to him and his family.

“Albert was a family man proud of his family’s achievements,” he said.

“I knew Albert to be loyal, to be supportive and to be generous. Albert Reynolds’s political bravery and his wisdom were the key ingredients in fostering a new dispensation of peace, tolerance and reconciliation, mutual respect and equality on this island. For that he will always have the enduring respect of the Irish people.”

“He was always a kind man, he never said anything nasty to me,” he said.

“He achieved an awful lot for the time he was there.”

“In working with Albert, two things struck me forcibly. The first, on a political and professional level, was his ‘can-do’ attitude and openness to ideas - he was always eager to find ways to do things better. The second, on a personal level, was his absolute devotion to, and adoration of, his family,” she said.

Irish EU Commissioner Máire Geoghegan-Quinn said Mr Reynolds have supported the decriminalisation of homosexuality in Ireland when she was minister for justice.

“That radical move would not have sat with his prior assumptions but, once convinced of the rightness of the action, he was immovable in his resolution on the issue,” she said.

Ms Geoghegan-Quinn said Mr Reynolds had a “dogged-determination” to do his best in the time he had as taoiseach.

“That dogged determination contrasted with his unselfconscious love of country music and his great sense of humour,” she said.

“Family was the most precious element in his life. They meant everything to him and his devotion to them was never diluted by his busy political life. They came first.”

Kieran Rose, chairman of GLEN (Gay and Lesbian Equality Network), said Mr Reynolds had made Ireland a fairer place for lesbian and gay people when the Government decriminalised homosexuality in 1993.

“As Taoiseach he led a government that began the journey to legislative and constitutional equality for lesbian and gay people,” he said.

“He agreed the programme for that government which included equality legislation that was later enacted and which now provides powerful protections against discrimination for lesbian and gay people in Ireland.”

Minister for Foreign Affairs Charlie Flanagan said Mr Reynolds would be remembered for his contribution to the Northern Ireland peace process.

“He took risks for peace and his courageous and single minded negotiation, with then British prime minister John Major, of the Downing Street Declaration in December 1993, was a remarkable achievement,” he said.

“I remember the robust nature of the relationship, up and down and in and out. We were constituency rivals, we were political rivals but strangely we ended up very well together, we ended up at friends.”

“I’m really sorry to hear of the death of Albert Reynolds. Albert acted on the North when it mattered,” he said.

Former taoiseach Liam Cosgrave, for Fine Gael, said it was with sadness he learned of the death of Mr Reynolds.

“Albert and myself used enjoy chats at the races where we exchanged our knowledge of form or lack of it,” he said.

Eamon Ryan, leader of the Green Party, said Mr Reynolds would be remembered for going the “extra mile” for Northern Ireland peace process.

“He was a true entrepreneur, and one who brought a risk-taking mentality into the variety of government offices in which he served,” he said.

“His political path was intertwined with the major controversies that marked Irish politics throughout the 1970s, 80s and 90s. Through those difficult and testing times he was always courteous and remained well liked.”

Bishop of Ardagh and Clonmacnoise Francis Duffy, whose diocese includes Co Longford, said Mr Reynolds played a significant role in the political life of the Ireland, including the Downing Street Declaration of December 1993.

“This success is a shining example of commitment to the common good and dedication to the long sought and precious goal of securing peace in Ireland,” he said.

“Albert Reynolds will be remembered locally as a committed and sensitive politician who made a real difference to the lives of his constituents in our community and economy.”

Ryanair chief executive Michael O’Leary said as a taoiseach Mr Reynolds achieved a “terrific transformation” in setting up Ireland for economic growth and the peace process.

“As my local TD in what was then the Longford-Westmeath constituency, I had some interaction with him. We were certainly very proud of him down there and I think history will be very kind to him,” he said.