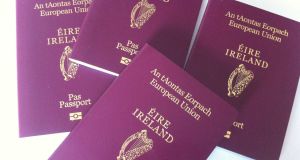 The Department of Foreign Affairs reported 67,972 passport applications from people in Northern Ireland and another 64,996 from people with Irish roots in Britain last year. Photograph: Bryan O’Brien

Minister for Foreign Affairs Charlie Flanagan said there were a number of reasons behind the surge but noted that in the months after the Brexit vote saw a 41 per cent increase in applications from Britain and a 27 per cent rise from Northern Ireland.

The department reported 67,972 applications from people in Northern Ireland and another 64,996 from people with Irish roots in Britain last year.

Diplomatic staff in Dublin were forced to issue an appeal for calm in the days following the Brexit vote in June after post offices ran out of passport application forms because of an initial surge.

Anyone born on the island of Ireland or whose parents are Irish automatically qualifies for citizenship.

A total of 24,443 passport cards, a credit-card sized travel document which is valid for travelling to 30 European countries, were issued last year.

The passport office’s figures for 2016 showed May was the busiest month as close to 100,000 applications came in. There were also surges in August, October and November. – (PA)