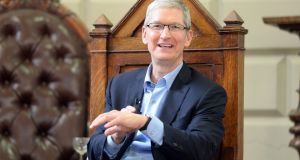 Tim Cook declines invitation to appear at Oireachtas finance committee to discuss the EU’s ruling that the company owes Ireland more than €13 billion in back taxes. Photograph: Eric Luke

Apple chief executive Tim Cook has declined an invitation to appear at the Oireachtas finance committee to discuss the EU’s ruling that the company owes Ireland more than €13 billion in back taxes.

The finance committee, which is chaired by Fianna Fáil TD John McGuinness, invited Mr Cook to appear at the committee at the beginning of February.

In a reply received by the committee this week, Apple executive Claire Thwaites has written on Mr Cook’s behalf to say that he had been advised not to appear.

“Given the sensitive nature of the investigation and the timing, we have been advised not to undertake any other direct activities, which could potentially prejudice future outcomes. It is on this basis that we are unable to appear before the Committee on this occasion,” Ms Thwaites wrote from Apple’s London office.

The Sinn Féin finance spokesman Pearse Doherty expressed disappointment and anger at the decision by Apple.

In a statement issued on Thursday, Mr Doherty said the EU’s ruling that Apple had been granted illegal state aid by Ireland “has created a huge debate in this country about our tax affairs and it is only right the finance committee of the Oireachtas carry out hearings on this issue.

“Tim Cook appeared before the US Senate hearings and it was his comments there that sparked much of the discussion and possibly even EU action in this case. For him to refuse to attend the Committee now is disrespectful to the Irish people.”

Mr Cook told a congressional hearing in Washington that the company had “negotiated a tax rate which meant that [its tax] was calculated at less than 2 per cent”.

However, the Irish authorities have repeatedly said that Apple did not have a special tax deal, which Apple also strenuously argued after the European Commission’s ruling last August.

Mr Doherty was also critical of Mr Cook’s refusal to appear at the Oireachtas committee even though he has appeared on Irish media on a number of occasions.

“He has also not been shy in speaking to Irish media about the case and his views on why the EU is wrong in its findings, so the excuse of an ongoing legal case is not valid. After all, both the Irish Government and EU Commission are involved in that appeal and I expect both to attend the Committee,” he said.

“I can’t see why Mr Cook wouldn’t appear. The issue is not subjudice and it would provide an opportunity to a public airing by Apple beyond the confines of Government Buildings,” he said.

Mr Sherlock said it was a “missed opportunity”.

Fianna Fáil finance spokesman Michael McGrath said he was “very disappointed” as he felt the company could have been of “signiificant assistance”.

However he said the Committee would “ontinue with its work on this issue and will engage with all those who are willing to attend” including Commissioner Margrethe Vestager on behalf of the European Commission. “I trust that the Revenue Commissioners will attend to put forward the State’s case,” he said.