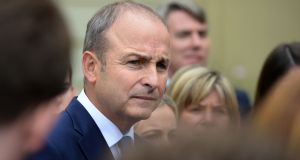 He said the presidents of the universities had all made the same case to him about funding.

“They need big money and they need it now,’’ he said. “Obviously, we do not have an endless pot here.’’

Mr Kenny was replying, in his first Leaders’ Questions of the new Dáil term, to Fianna Fáil leader Micheál Martin, who made it clear third-level funding would be a major issue for the party in next month’s budget.

Mr Martin said core expenditure for each university student was down by 22 per cent since 2011. The student-lecturer ratio had worsened dramatically from 15:1 to 20:1, which compared with 14:1 across the Organisation for Economic Co-operation and Development (OECD).

Third-level funding could not be kicked down the road and must be faced up to in the budget, said Mr Martin, adding more than €600 million was being sought by the sector over the next five years.

Mr Kenny said everybody could agree the impact made by Irish students over the years had been quite extraordinary in many cases.

Everybody could agree something had to be done about this, he said. “It seems the disagreement is about where the money should come from,’’ Mr Kenny said.

The Taoiseach said it was not a case of letting the situation drift because they could not do that.

“Deputy Martin raised a very important point,’’ said Mr Kenny. “The immediate business is to deal with the short-term funding.’’

Mr Martin said universities were declining in terms of ranking, while some institutes of technology were very close to insolvency.

There was little capital investment in third-level institutions for quite some time, he said. “Investment in education is central to our economic future,’’ said Mr Martin.

He said arresting the decline in the third-level sector could not await the deliberations of an Oireachtas committee over the medium term.

“By all means, there are detailed issues in which the Oireachtas committee will get involved but all options involve substantial exchequer funding of our third-level sector,’’ he said.

Róisín Ingle: How to eat out in a pandemic. Don’t do what I did

1 Prepare for six to nine months of Covid-19 restraints, warn health officials
2 Speed and distance of Covid-19 droplets tracked by Mater researchers
3 Covid-19: Seventy cases in Cork traced to local pubs and restaurants in recent weeks
4 No joy for consumer with a faulty Husqvana chainsaw
5 Great outdoors: Meet the teachers taking lessons beyond the classroom
Real news has value SUBSCRIBE