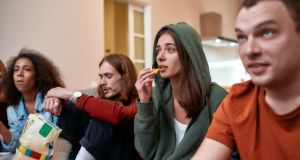 It takes up to an hour to feel the effect when cannabis is eaten rather than smoked when the effects are almost immediate. File photograph: Getty

Teenagers are eating cannabis-laced chocolate and gummy bears that can trigger hallucinations or psychosis, the Dáil has been told.

Fine Gael TD Emer Higgins said parents in her Dublin Mid-West constituency had been contacting her about their children using edible cannabis.

She said the “sugary taste of sweets and chocolate is clearly more attractive to children who may never experiment with cannabis if they were forced to smoke it”.

Highlighting the dangers of this new trend, she said that in “avoiding the foul taste of tobacco, young people are attracted to gummy bears and chocolate laced with cannabis”.

It takes up to an hour to feel the effect when cannabis is eaten rather than smoked when the effects are almost immediate.

“Teenagers eat a square of cannabis laced chocolate, feel no impact and then eat the rest of the bar. As a result, they accidentally overconsume dangerous amounts of the drug” and by the time they feel the effects they are “in over their head”.

Ms Higgins said children are forced to wait for cannabis to clear through their body and the effects can last up to 12 hours.

“If the cannabis triggers psychosis or hallucinations, this will be hell for the teenager. This is why edible cannabis puts a disproportionate number of people in hospital.”

She said a study in Colorado in the US – where cannabis is legal – showed eating instead of smoking it “makes you 10 times more likely to end up in hospital”. Already, cannabis use among teenagers has almost doubled in just a few years.

Almost one-in-five Irish 16-year-olds are now using cannabis, she warned, adding that “the emergence of tasty, sugary, sweets laced with cannabis will only further increase its use among teenagers”.

She was speaking during a Dáil debate on the National Drugs Strategy.

“Our heads are in the sand if we keep locking people up and bringing them through the criminal justice system. It is simply a waste of time,” he said.

Mr Kenny said “we have to be bold and take a different approach to addiction and to why people turn to addiction. If I am still around in 10 or 15 years time we will still be talking about this issue of the cruelty of bringing people who suffer from addiction through the criminal justice system.”