Tears and celebrations likely to follow as Ireland says Yes 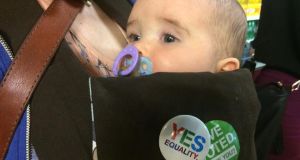 The counting is continuing, but the smiles of all those who voted Yes are widening.

The chests of Yes campaigners are being pushed out; the tears and celebrations are likely to follow when confirmation of the results are announced in Dublin Castle.

Not only has Ireland has agreed to same-sex marriage, it has done so in a louder voice than many could have imagined, carried on the back of a remarkable turnout and an engagement by younger people not seen in years.

Following years of the politics of recession and bailout, the young were given something they could believe in, campaign for and vote for. And they did.

For campaigners, the main task was to tap into this latent goodwill and desire to make a societal change a generation could claim as its own.

The campaign became about more than just same-sex marriage. It became a debate about the place of the gay community in Irish society and the country’s acceptance of it.

Yes Equality, the umbrella organisation comprised of a number of groups, deserves enormous credit for the drive and organisational skill it has shown in recent weeks.

That’s not to say it was all plain sailing. There were wobbles. One came around the Easter period when many in politics felt the Yes campaign was talking to itself, although this was swiftly rectified with a focus on personal stories and the experiences of gay people and their families.

The term “national conversation” is one of the most horrible phrases to enter public debate in recent years, but the campaign offered something along those lines. Many gay people felt comfortable to speak about themselves and who they are, winning the arguments in their families and communities.

A second wobble came two weeks ago as the No side gained traction with issues such as surrogacy and adoption, and the absence of opinion polls, coupled with fears of a shy No vote, increased nerves.

Again this was rectified by personal stories, the most powerful of which was from journalist Ursula Halligan, and interventions by people such as Daniel O’Donnell.

Yes campaigners took heart and many in the political and media bubble predicting doom were out of step with the country. Canvass returns from the last month told the Yes side they would win, and win well.

The campaign was not party political, but the parties can take credit today. Labour championed same-sex marriage from the outset of the Government’s term, and before. Eamon Gilmore’s role in pushing it on to the agenda must be also be acknowledged.

After initial reticence, the Taoiseach took on a leading role in the campaign and Fine Gael pushed as if the issue were its own. Maybe it sensed an avenue to broaden the party’s appeal to different sections of the electorate but many in the party believed deeply in it, even if the enthusiasm wasn’t shared by some of its conservative members.

Credit too must go to Fianna Fáil leader Michéal Martin and Sinn Féin, both of whom could have opposed the referendum for narrow political gain but chose not to. Mr Martin in particular had to deal with the fact that not only were many of his rank and file members against the proposal, some of his TDs opposed it too.

Yet, this one was largely for the younger generation, which turned out in its droves. Stories of emigrants returning home to vote and huge increases in voter registration offered indications of what was to come but the final results were astonishing.

Campaigners said those on the supplementary register were overwhelmingly young, and the turnout showed they proved the old adage that they don’t vote wrong.

All across the country, the turnout on the supplementary register hovered around 90 per cent, even reaching 99 per cent in Huntstown, west Dublin, by close of polls.

Such enthusiasm can be infectious and perhaps convinced older, sceptical voters not to stand in the way of something younger generations believed in.