TDs have long had concerns over electronic voting in the Dáil 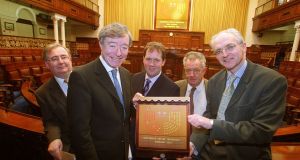 Then government chief whip Séamus Brennan with Pat Rabbitte, Paul Bradford, Desmond O’Malley and John Gormley at a photocall on February 25th, 2002, to mark the introduction of electronic voting in the Dáil. Photograph: Maxwells/Handout

Thirty years ago, in 1989, Progressive Democrats leader Dessie O’Malley suggested to his coalition partner Charlie Haughey that it might be a good idea to introduce electronic voting in the Dáil.

The Fianna Fáil taoiseach rejected the idea out of hand. In his most imperious manner, he said the voting block on Wednesdays represented his only slot of the week to engage with his backbenchers.

Haughey and the government of his successor Albert Reynolds knocked the idea on its head. But it was a coming thing, championed by Fianna Fáil whips such as Noel Dempsey and Séamus Brennan. They travelled to Portugal, Spain and the Basque parliament in Bilbao to see the systems there.

“I spent the best part of 2½ years as whip with [the] Albert Reynolds government trying to convince [the] opposition about the merits of the voting system,” says Dempsey. “With little luck.”

Electronic voting was finally introduced in 2001 when Brennan was government chief whip. Before that, when a vote was called, every TD had to walk through the lobby in the Dáil.

That meant TDs had to go up the stairs to the mezzanine and then turn right or left, depending on the way they were voting. Each TD who passed through was noted by tellers as they voted for and against. The votes were then totted up. This procedure was time-consuming and unwieldy. But, barring unaccountable accidents, it was accurate. Nevertheless, electronic voting was a quick and effective replacement, or so it seemed.

There were concerns even then about its security and reliability. Facing questions about what would happen if TDs voted twice, Séamus Brennan said: “If it is deliberately done, then the penalties will be very severe.”

However, no sanctions were ever introduced. The standing orders of the Dáil make no reference to protocols to do with electronic voting. Neither does the members’ booklet given to each TD. The constitutional requirement is that members be “present and voting”. That essentially means they must be in the Dáil chamber when voting.

When electronic voting was being established, there was a move to give each TD an access code to his or her voting pad. But the idea was never put into practice.

Under the rules, old-fashioned “walk-through” votes still happen – for the election of a Taoiseach, budget votes, or motions of confidence in the Government of the day.

Dempsey says these elements were retained mostly for the “show element”. He said if there was an unpopular measure the opposition could force the Government TDs to walk through.

Moreover, if a TD is not satisfied with an electronic vote, he can ask the Ceann Comhairle for a vote other than by electronic means. For 18 years, the system worked smoothly, or people at least thought that it did.

Until this week, the main controversies to do with electronic voting stemmed from when TDs inadvertently voted the wrong way. In 2010, Timmy Dooley voted in favour of holding a byelection in Donegal South-West, contrary to his government’s policy.

In 2013, Labour TD Michael McNamara seemed to defy his party whip on a contentious vote on an abortion motion during a late-night session of the Dáil. Party leader Eamon Gilmore later said he had “simply pressed the wrong button”.

Last year, Shane Ross sat in his colleague Katherine Zappone’s seat by mistake and voted on her behalf. He tried to correct the error by cancelling the vote but then voted the other way. He immediately corrected the error with officials.

The system has never been audited by the Oireachtas’s staff, who have effectively been its guardians since its introduction. However, in the wake of the Niall Collins/Timmy Dooley controversy that will now change.

The two will now face an ethics investigation. The more slapdash rules where TDs voted for others who were in the chamber, but not in their seats, will also no longer be acceptable.

That latter practice continued, with every greater frequency, under the eyes of the authorities. “Even that is bad practice and leads to the integrity of the system being undermined. It’s just not right,” says Noel Dempsey.