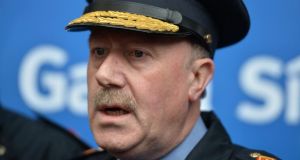 Martin Callinan: Claimed he was forced out of his job as Garda commissioner after being visited by the secretary general of the Department of Justice Brian Purcell. Photograph: Alan Betson/The Irish Times

Taoiseach Enda Kenny says he is unwilling to break the law by commenting on reports that he was recalled to assist in resolving conflicting evidence to a commission of investigation on events leading to the departure of Martin Callinan as Garda commissioner last year.

Mr Kenny, Attorney General Máire Whelan and Martin Fraser, secretary general to the Government, are reported to have been called back by Mr Justice Nial Fennelly’s commission which is investigating the circumstances behind Mr Callanan’s resignation.

Speaking on his St Patrick’s Day visit to the United States, Mr Kenny said it was “an offence for anybody associated with the commission to comment on it and I do not propose to breach the law”.

He was speaking to reporters at the South By Southwest Interactive technology festival in Austin, Texas.

“I have absolute respect for Justice Fennelly and it is not correct that a report that has not yet been produced should be published.”

“I abide by the law here,” he replied. “This is the reason why I don’t comment on these things because once the terms of reference are signed off by the Government, it becomes a matter of the sole responsibility of the member.”

Mr Callinan has claimed he was forced out of his job as commissioner after being visited on the night of March 14th, 2014 by the secretary general of the Department of Justice Brian Purcell.

Mr Purcell told him he had met Mr Kenny, Mr Fraser and the then minister for justice Alan Shatter about the bugging of telephone calls to and from Garda stations by Garda headquarters.

Stressing the seriousness of the situation, the justice department official later called Mr Callinan to say he would not survive a regular meeting of the cabinet that week.

A Garda commissioner can only be forced out of office by a cabinet vote. Mr Kenny has argued that Mr Callinan retired and was not fired.

Mr Justice Fennelly had been expected to furnish an interim report on Mr Callinan’s departure last year but it has been delayed indefinitely.