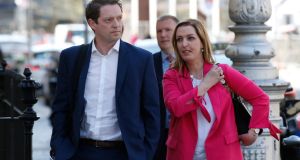 The acting head of the health service has told terminally-ill Limerick woman Vicky Phelan who brought the CervicalCheck controversy to light that he is “listening intently” to her calls for accountability.

John Connaghan, interim director general of the Health Service Executive, told the Dáil Public Accounts Committee that he heard the 43-year-old tell the committee on Wednesday night she wanted accountability. He also said that he listened to Stephen Teap, whose wife Irene died in 2015 after two undisclosed false negative smear tests, when he addressed the committee.

Mr Connaghan said that the process for how CervicalCheck intended to communicate audit results showing false smear tests to patients was developed “with the best of intentions” and consistent with a policy of open disclosure. Hoever, he said the HSE’s “collective failure” was on “ensuring effective follow-through on these good intentions.”

While the results were communicated to the women’s doctors, “the arrangements thereafter appear to have broken down” and that a “large proportion” of women were not informed, he told the committee.

“The impact of this failure has been profound both for every single woman affected and their families,” Mr Connaghan.

“It has also undoubtedly caused significant levels of fear and anxiety for the wider population of women living in Ireland. And it has sadly undermined public confidence in the CervicalCheck programme.”

Mr Connaghan said he heard Ms Phelan say she was there because she wanted to see changes and he wished to reassure her that he was “determined to take on board all the lessons that are learned from this unacceptable chain of events.”

The HSE acting chief repeated his apology for “the confusion and alarm” created by CervicalCheck’s failure to communicate incorrect smear test results with the women affected.

“This failure has ultimately impacted on every female in Ireland, their families, their spouses and their children,” Mr Connaghan told the committee.

He promised Ms Phelan and Mr Teap that “if there is a requirement to hold individuals to account on a personal basis, we will do so” but said that the scoping inquiry set up by the Government to investigate the controversy would allow due process and fair procedures to be followed. The inquiry will be led by Dr Gabriel Scally.

Let's see how intently he is listening @SiCarswell.

Ms Phelan settled a €2.5 million High Court case against a US laboratory that provided her with an incorrect smear test result. She took the case after learning that her 2011 smear test, originally said to be normal, was found as a result of a 2014 audit to be incorrect. She was told about the test in 2017.

Mr Teap’s wife was diagnosed with cancer in 2015 and died last year after two undisclosed false negative smear tests in 2010 and 2013. He only learned about that the tests were incorrect last month.

It emerged as a result of Ms Phelan’s settlement that at least 162 women with cervical cancer were not informed about the CervicalCheck audit. Of 209 women who could have had earlier intervention in light of false tests, 18 have since died.

At the committee hearing, Department of Health secretary general Jim Breslin acknowledged the appearances by Ms Phelan and Mr Teap at the committee and paid tribute to them for speaking publicly.

“Their brave testimony over recent days, and that of other women and families, has raised profound questions for how the national cervical screening programme and the health service generally engage with people,” said Mr Breslin.

“They have been willing to speak publicly about deeply personal maters. In doing so, they have drawn attention to their experience in the hope that this will lead to change. At the very heart of that change must be how the health service engages with individuals when things go wrong.”

Explaining the failure of Department of Health officials to escalate their knowledge the non-communication of smear results up the chain in the department and to the minister of health in early 2016, Mr Breslin said that “a reasonable approach” was taken by the department “at the time based upon the information available to it.”

Had “the subsequent widespread non-disclosure” been escalated by CervicalCheck within the HSE and raised with the department, “this would have triggered a major concern and a much different attitude,” he said.

“But, based upon the information we had, we viewed the initiative taken to communicate audit findings to women in a positive light,” said Mr Breslin.

“However, the widespread and still unfolding distress caused by the non-disclosure of the clinical audit results to the women concerned demanded serious reflection.”

Ahead of the committee’s hearing, TDs had overnight received a large volume of records, including previously undisclosed records by CervicalCheck.

Among those records were minutes of a meeting between CervicalCheck and doctors treating patients aimed at resolving a row over communicating false smear test results.

Deputies criticised the late disclosure of records, received by some members just minutes before the hearing with HSE and Department of Health officials was due to commence.

Social Democrats TD Catherine Murphy said that this was part of a “management strategy” from the HSE effectively to hamper the committee’s work,.

Mr Kelly read out a tweet to the HSE and department officials at the hearing posted by Ms Phelan during the hearing, in which she said: “This has been a gameplay since the #CervicalCheckScandal broke. Drip feed inflammatory documents to try to water down the effect of the cover up.”

The Labour TD described the response of HSE and department officials to the controversy as “arse-covering.” He noted the call from Ms Phelan that she wanted accountability and said that he had “cried” through her testimony the previous evening at the committee.

In response to Mr Kelly’s criticism, Mr Breslin said that he only received questions from the committee seeking answers and documents in writing on Tuesday afternoon and signed off on responses on Wednesday evening after attending an Oireachtas committee hearing for most of that day.

Under questioning from Sinn Féin TD David Cullinane about how many women were told about false smear tests in 2016, the HSE National Director, Strategic Transformation and Planning, Stephanie O’Keeffe said that Prof Grainne Flannelly, the former clinical director of CervicalCheck, told women who contacted the programme about their screening history after being diagnosed with cervical cancer.

“I can’t tell you how many women exactly did Professor Flannelly speak to because she is not here to give that evidence,” said Ms O’Keeffe.

Damien McCallion, the National Director of National Screening Services, who took over from Prof Flannelly after she stood down last month over the controversy, told the committee that letters were sent to 40 doctors - not the women - or 20 per cent of the affected cases - informing the clinicians about the clinical audit.