‘If you had 30,000 detached houses in Dublin you’d sell them all in a week,’ says Kenny 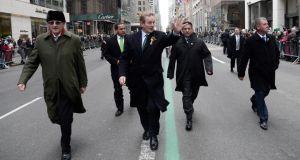 Enda Kenny takes part in New York’s St Patrick’s Day parade. On the final day of his US visit, he said: “If you had 30,000 three- bedroom detached houses in Dublin you’d sell them all in a week. That’s the pent-up demand that’s there.” Photograph: EPA/Andrew Gombert

Taoiseach Enda Kenny has said there is a pressing need to build more houses in Dublin to ease pent-up demand that has pushed up the price of some properties in the city by as much as €30,000 in a single weekend.

In New York, on the final day of a week-long visit to the US for St Patrick’s Day, Mr Kenny told a business gathering that the rate of construction would have to pick up radically to restore normal market conditions.

“If you had 30,000 three- bedroom detached houses in Dublin you’d sell them all in a week. That’s the pent-up demand that’s there,” he said.

Taking questions from his audience at accounting firm Grant Thornton, the Taoiseach noted that the spike in demand was seen in certain Dublin locations, but not everywhere in the city.

While the Government’s aim remains to boost residential property market activity outside Dublin, he said this would take time.

“It is true to say that because of the cluster effect of Dublin and its attractiveness as an international location, that demand for housing has risen seriously again, and houses that have been withdrawn from the market on a Friday have gone up by €20,000 or €30,000 on a Monday,” he said.

“To get that spread throughout the country is where we need to be.”