Opinion: The genie was well out of the bottle before the concession by Kenny that the Seanad seat targeted for a thoroughly humiliated John McNulty ‘should not be accepted in those circumstances’ 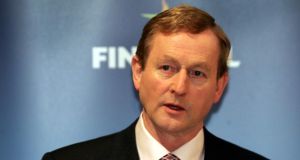 ‘While endless columns and air time are sacrificed to fulminations over the McNulty fiasco, the would-be stroke that has reduced the Oireachtas to an orgiastic lather can be reduced to one small and boring fact: Enda Kenny’s contempt for the Seanad.’ Photograph: Matt Kavanagh / THE IRISH TIMES

There are times when Prof Morgan Kelly’s dismissive description of this State as “tiny and boring” is annoyingly apt. Our political dramas are small and boring probably because they are so stupidly, self-destructively transparent. Like Coronation Street’s stupid Jim McDonald robbing a bank without a balaclava.

So while endless airtime is sacrificed to fulminations over the McNulty fiasco, the would-be stroke that has reduced the Oireachtas to an orgiastic lather can be reduced to one small and boring fact: Enda Kenny’s contempt for the Seanad. And what is more boringly predictable than that? He tried to abolish it a year ago. Could anyone be more transparent? The genie was well out of the bottle before yesterday’s concession by Kenny that the Seanad seat targeted for a thoroughly humiliated John McNulty “should not be accepted in those circumstances”, and no amount of breast-beating will squeeze it back inside. If Kenny had an atom of respect for the Seanad, McNulty would still be a fairly anonymous county council aspirant, running a store and dedicating himself to the pitiless regime endured by most prospective national election candidates. First by serving as a community activist, schmoozing through selection meetings and on to the county council, before getting a party nomination for a general election.

But the Seanad precludes the need for all that. An important-sounding title, an office in Leinster House with “access”, a pensionable salary well above the average industrial wage (for a part-time job) and – be still, my beating heart – free and safe parking in the heart of the capital. For life. Plus, they become media catnip, a vital tool in the scheme to move to the big house next door. The assumption that none of the electors would look any deeper for McNulty’s cultural credentials than a suspiciously recent elevation to the board of Imma says all we need to know about everyone involved.

Now, after all that Sturm und Drang, try this little experiment. Ask a few relatively informed people around you to name some Seanad members who have managed to penetrate their indifference. David Norris? Tick. Feargal Quinn? Tick. John Crown? Tick. Rónán Mullen? Tick. Ummm, getting harder now. Shane Ross? Nope. He made it into the big house next door. Katherine Zappone? Tick. Marie-Louise O’Donnell? Tick. The same names crop up repeatedly, and they all happen to hail from the universities panels and/or had public platforms anyway.

Of course there are thoughtful, patriotic people in the Seanad who value their own and the public’s time and brain cells. The question is, looking at the overall calibre, how will universal suffrage solve that problem, to put it nicely? Michael D Higgins, for example, is now seen as the discerning choice of a national electorate of poets and visionaries. Frontline’s role in his victory is conveniently forgotten.

Jim D’Arcy (FG) : “I agree with the Minister that most parents and teachers are supportive of the need to overhaul the junior cycle for the good of students, but teachers have legitimate concerns. You cannot fly an aeroplane without a pilot.”

David Norris (Ind): “You can with drones, and there are plenty of them in government.”

D’Arcy: “That would be a bit of an omelette all right.”

What kind of magical reforms could produce a depoliticised upper house filled with patriotic people of ideas and relevance, wisdom and gravitas? People, crucially, with little or no regard for the perks of office or with a gimlet eye on the house next door?

Above all, why would such a distinguished individual propel herself into a type of Seanad X-Factor contest?

The Fiscal Advisory Council might be a template of what the Seanad could be: a truly independent body with a brief, say, to assess how and whether the EU and Government are meeting certain objectives and to communicate that reality, honestly and accessibly, to the people. At least we could never again say we did not know.