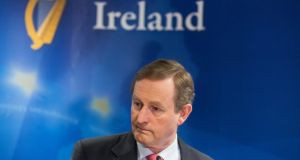 Taoiseach Enda Kenny has refused to repeat the pledge he made before the 2011 general election that he will bring an end to the trolley crisis in Irish hospitals if re-elected.

This winter many hospitals struggled to transfer patients from their emergency departments to wards due to overcrowding.

There was a similar crisis last January.

In a round-robin interview with political reporters this Christmas, the Taoiseach was asked how people could trust him on health issues when he failed to deliver on his promise on the trolley crisis during his first term in office.

“Obviously these are always challenges. The numbers have fallen now, in terms of trolley waiting lists.

“We would like to see that continue to reduce so that you have the minimum number.”

Asked if he would repeat the promise he made five years ago, he said: “Well what I will repeat is this: now we have a record of five years of a substantial achievement in terms of rectifying the public finances of the country and jobs creation.

“I will say that my intention is to continue with that forward development and that economic progress so that we can continue to create more jobs that pay. . . therefore less tax for people to pay and a bigger engine to invest in those very services.

“We need an infrastructure investment capacity both in terms of the personnel, doctors, nurses and so on but also the infrastructure.

Asked if he agreed with Minister for Health Leo Varadkar’s contention that, if this Government is re-elected, it needs to pay more attention to the health service, he said: “What the Government will pay attention to is continuing to drive the recovery . . . to have the engine . . . you need an economic engine to be able to provide for these many services . . . not just in health but in education and in justice and in defence and infrastructure.

He maintained that universal health insurance, long-fingered by Mr Varadkar, remains on the agenda.

“You need to look at the longer-term vision . . . to have universal healthcare to end the two-tier system.

“To have the evolution of hospital groups into hospital trusts and to be able to get the very best out of the taxpayers’ money for the patient and for those who serve those patients . . . nurses, doctors, frontline staff and so on.”

Asked what his own biggest regret was during the Government’s term of office, he said: “Well, I don’t like to have distressing stories in regard to health issues that arise occasionally.

“I find that difficult, I have to say.

“That’s why Minister Varadkar is tackling this in a really vigorous way now and I hope we can continue the progress that will lead us to having a universal healthcare system that will provide service for a population that is aging.”