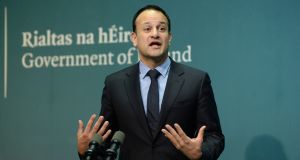 The Taoiseach has requested a general review of the Strategic Communications Unit. Photograph: Dara Mac Dónaill

Taoiseach Leo Varadkar has moved to tighten up the rules on so-called advertorials paid for by the Government following the controversy surrounding paid-for content on Project 2040.

The Taoiseach has written to Government secretary general Martin Fraser recommending a series of directions to the Strategic Communications Unit (SCU), which commissioned the content in national and regional newspapers.

Mr Varadkar made four specific requests. Firstly, any sponsored feature articles should continue to be clearly identifiable. “This is best done by including the Government of Ireland (Rialtas na hÉireann) logo and they should state clearly in every case that the copy is ‘advertorial’, ‘advertisement’, ‘sponsored’, a ‘commercial feature’ or a ‘special feature’,” he wrote.

Secondly, he has instructed that the final approval of the article must be made by either the Department or the SCU. In the advertorials which have appeared to date, it was not the SCU which had final approval, rather the media agency which had been commissioned.

Thirdly, Mr Varadkar said anyone who is interviewed for an advertorial or infomercial should be informed of the purpose and their permission sought. Finally, he stipulated that politicians and public representatives should not feature in any paid-for content by Government other than relevant office-holders.

In one publication, the Longford Leader, a photograph appeared in the paid-content of a local councillor who was also a Fine Gael candidate in the general election.

The Government spokesman said the Taoiseach had also asked Mr Fraser to conduct a general review of the unit with a view to make further recommendations.