President describes Enda Kenny as a ‘great guy’, says he will ‘absolutely’ come to Ireland

US President Donald Trump says he 'loves Ireland' during a meeting with Taoiseach Enda Kenny at the White House. Video: Reuters 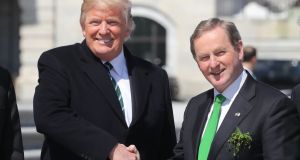 The president meets the Taoiseach: Donald Trump and Enda Kenny after a “Friends of Ireland” lunch in Washington. Photograph: Niall Carson/PA Wire

Mr Kenny, who last year described language used by Mr Trump as “racist and dangerous”, said he took the decision to invite the controversial US president because, in Ireland, “invitations are always returned, and returned in kind”.

Although Mr Trump said he “absolutely” intends to return to Ireland, officials yesterday played down the possibility of a visit this year. Mr Trump is expected to visit London in the autumn, but it is believed that an official visit to Ireland is more likely after the US mid-term elections next year.

Addressing the annual speaker’s lunch on Capitol Hill – one of the few occasions the US president visits the seat of the legislative branch of the government – Mr Trump described the Taoiseach as his “new friend” and a “great guy”. The president praised the “tremendous contributions” Irish immigrants and their descendants have made to American life.

“The people of Ireland and the people of the United States have stuck together through good times and bad times,” Mr Trump said. “Over many centuries we have built a bond that thrives, inspires and endures. And with us, it’s going to be closer than ever before, I can tell you that.”

Mr Kenny also congratulated Mr Trump on his electoral victory. “You beat them all, whatever they say,” he said, noting he had contested 20 local and general elections himself.

Mr Kenny presented the traditional bowl of shamrock to the US president in a specially commissioned crystal bowl at the annual St Patrick’s Day reception in the White House.

Mr Kenny said he had a very “constructive, beneficial” discussion with the president on immigration. In particular, progress was made in advocating the introduction of more than 10,000 E3 visas for Irish citizens, officials said. On the issue of the undocumented Irish in the US, Mr Kenny said the president had told him the primary focus of his immigration policy was on border security, secondly on those who had criminal records, and then on anyone else who might be undocumented.

“I would say to Irish undocumented, if there are small issues like parking fines or traffic lights, they should clear those up through their legal people, whether they be in whatever city,” Mr Kenny said.

“That’s an issue that can lift the concern and the fear and anxiety that many undocumented Irish might have.” Mr Kenny travels to New York today, where he is due to march in the St Patrick’s Day parade.