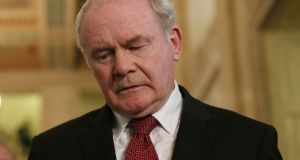 Sinn Féin’s Martin McGuinness: “Is a deal achievable? I think with goodwill on all sides it is achievable . . . I do think we are talking more about days rather than weeks.” Photograph: Niall Carson/PA Wire

The Sinn Féin Deputy First Minister Martin McGuinness has said that a political deal is “achievable” and that the time frame for agreement was days rather than weeks.

As all-party talks continued at Stormont on Wednesday Mr McGuinness said the negotiations were beginning to intensify. The negotiations have been running for almost six weeks, concentrating on paramilitarism, welfare reform, budgets for the Northern Executive, and how to deal with the past.

“Is a deal achievable? I think with goodwill on all sides it is achievable . . . I do think we are talking more about days rather than weeks,” he said.

Mr McGuinness however claimed that there had been attempts to “sabotage” the negotiations in recent weeks. He was also critical of some parties other than Sinn Féin and the DUP.

He said that “the difficulty about recent times is that some parties can’t get out the door quick enough to say something which negatively feeds into what we’re trying to do”.

Speaking at the launch of the Unite trade union’s economic strategy at Stormont, Mr McGuinness said politicians could not “stand aside and passively accept the swingeing cuts being pursued by a Conservative government wedded to an austerity agenda”.

“The Tories may have been dealt a major blow this week after the House of Lords voted to delay tax credit cuts and to compensate those affected in full.

“But George Osborne’s assault on the welfare system and the most vulnerable people in society isn’t over. He will be back because this is a matter of ideology for the Tories. This arrogance must be confronted and challenged at every opportunity.

“These challenges are best faced by working together. It is time for everyone across civic society to join together to challenge Tory austerity in order to protect the least well off in our communities.”