Tánaiste lobbies for immigration reform in unpredictable US political scene 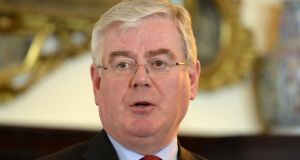 Tánaiste and Minister for Foreign Affairs Eamon Gilmore to lobby on behalf of estimated 50,000 Irish illegal immigrants in US. Photograph: Dara Mac Dónaill

June 17th was one of the hottest days of 1864, when flames engulfed a laboratory at the Washington Arsenal. Two dozen women and girls, mostly Irish immigrants and Americans of Irish descent, had been filling cartridges with gunpowder for Union soldiers in the Civil War.

Twenty-one women and girls died in the blast caused by exploding fireworks laid outside the laboratory to dry for the upcoming July 4th Independence Day celebrations. Among the dead were Irish names such as Roche, Horan, Branagan, Lacey and Collins.

Today, Minister for Foreign Affairs and Trade Eamon Gilmore, on his last trip to the US as Tánaiste and Labour leader, will lay a wreath at a memorial in the Congressional Cemetery near Capitol Hill to commemorate the Irish immigrants killed in that explosion 150 years ago at what is now the site of Fort McNair in southwest Washington DC.

Mr Gilmore’s visit recalls the long tradition of Irish immigration into the US and how it continues to this day. He is the latest Government minister to pass through the US capital to lobby US lawmakers to pass comprehensive immigration reform. This would help almost 12 million illegal immigrants, including an estimated 50,000 Irish, find either citizenship or some kind of legal status to allow them enter and leave the US. The Government also wants a specific Irish route into the US for tens of thousands of new migrants created with a new ‘E3’ visa.

A comprehensive immigration bill, crafted by both Democrats and Republicans in the Democrat-controlled Senate, passed that chamber last year but has faltered in the Republican-led House of Representative over that party’s fears about rewarding the past behaviour of illegal immigrants by granting them legal status to remain in the US, and concerns about the government’s ability to police a leaky border with Mexico that might encourage new waves of migrants.

Cantor supported legal status for immigrant children brought to the US illegally but opposed the Senate’s comprehensive bill, yet he came under fire from Brat for supporting President Obama’s “amnesty.”

Immigration reform activists have pointed to a poll by Democratic firm Public Policy Polling for the labour-linked Americans United for Change which showed that 72 per cent of voters in Cantor’s congressional district support immigration reform. The biggest reason for Cantor losing, it appears, was because he was unpopular in his district and regarded as a Washington insider at a time when approval for America’s national political establishment is plumbing new depths.

“Let’s be honest – the chances of the House passing immigration reform were not good anyway,” said Republican pollster Whit Ayres. “Are they less because of Cantor’s loss? Sure. I don’t think they are significantly less than before.”

Even the perception that immigration reform was a factor in Cantor’s loss makes it more difficult for House Republicans to pass it.

-averse “Politicians are by and large very risk

-averse and this increases the risk potential to a sitting member of Congress,” said Republican strategist John Feehery. “Cantor very clearly said in the campaign he was against the Senate bill but that wasn’t enough. You cannot really nuance this. Everything you are for will be seen as an amnesty.”

Immigration advocates note that senior Republican senator Lindsey Graham comfortably won his primary in South Carolina, one of the most Republican states in the country, seeing off six conservative rivals on a strong and clear campaign in support of immigration reform.

“No pro-immigration reform Republican Congressman has lost their primary,” said Ciaran Staunton, co-founder of the Irish Lobby for Immigration Reform, who believes anti-immigration reform campaigning by Republicans could energise the Democratic base in the November mid-term elections, particularly across America’s Rust Belt, from New York to Illinois, and help the party win back the House.

It is in this unpredictable political situation that the Tánaiste will press the Irish case again on Capitol Hill today and tomorrow.