Support for Enda Kenny ebbing away among Fine Gael grassroots 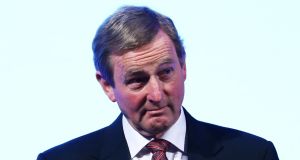 Grassroots Fine Gael support for Enda Kenny’s leadership is ebbing away, according to party sources.

TDs and Senators say councillors and activists believe Mr Kenny should indicate when he intends to stand down in the interests of the party, given the minority Government’s fragility and the possibility of a snap general election.

“It is said more in sorrow than in anger in many cases,’’ said a backbench TD. “It is recognised Enda Kenny did a great job in restoring the party’s fortunes.’’

“Many of them remember him coming to talk to them as leader in bad days for Fine Gael,’’ said a TD. “But they are adamant he should go soon or set a reasonable time frame for his departure.’’

Carlow-Kilkenny TD Pat Deering said Mr Kenny should stand down soon, so that a leadership contest could be held and a new taoiseach elected by September.

Mr Deering said he was opposed to the moving of a motion at a meeting of the parliamentary party calling on Mr Kenny to go. “I think senior people in the party should talk to him,’’ he added.

Louth TD Peter Fitzpatrick said Mr Kenny should say “sooner rather than later’’ when he will stand down as leader.

“The Taoiseach has done a fantastic job for the party and the country, but there is uncertainty about how long the Government will last,’’ he said.

“It’s the last chance for an orderly transition in the interests of the the party. There is nothing personal about it. This is pragmatic politics,” he said. “I do not trust Fianna Fáil and Micheál Martin to force an election on some issue on budget preparations. I do not trust them particularly, with polls they way they are.”

Dublin Bay South TD Kate O’Connell said the leadership issue was a sideshow and there were more important issues. “The debate [on leadership] will probably take place sooner rather than later, but at the moment this carry-on is unhelpful.”

Wexford TD Michael Darcy said if Enda Kenny clarified his intentions it would be helpful. “I do not think it’s the right thing to do to sign a motion [forcing a leadership contest].”

Cork South-West TD Jim Daly said: “The conversation on leadership will have to be had, but post the budget.”