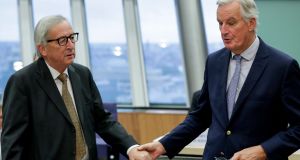 Irish Government sources were last night playing down the chances of any breakthrough on Brexit when Taoiseach Leo Varadkar meets British prime minister Boris Johnson in Liverpool on Thursday.

While reports from London suggested the meeting could lead to a breakthrough in time for next week’s crunch EU summit in Brussels, several senior Irish sources played down this possibility.

The notice of the meeting, the wording of which was agreed between Government Buildings and Downing Street, said only that the talks would be “about the process for securing agreement for a Brexit deal” and not, Irish sources pointed out, about actually securing an agreement on the substance on how the UK leaves the EU.

Dublin has repeatedly refused to negotiate directly with the UK on Brexit, insisting that the negotiations can only take place between the British government and the EU taskforce under Michel Barnier.

Yesterday, Mr Barnier said it was not currently possible to reach agreement with the UK, and there is little expectation in Brussels that any breakthrough is possible to enable EU leaders to approve a deal at next week’s summit.

Nonetheless, Mr Varadkar and Mr Johnson are likely to discuss the two main impediments to an agreement – the nature and operation of any “consent clause” which enables a Northern Ireland administration and assembly to have a say on remaining under EU single market rules, and the future customs relationship between the North, the rest of the UK and the EU.

Dublin objects to any arrangement that would require customs checks between North and South, but the UK says that any such checks – inevitable if the North leaves the EU customs union with the rest of the UK – can be managed to the point of near-invisibility and irrelevance. Dublin does not so far accept these assurances.

On Wednesday in the Dáil, Mr Varadkar stressed the views of the people of Northern Ireland, who voted to remain in the EU.

Officials say that Dublin is open to discussing how mechanisms could work to attain the consent of the Northern Ireland institutions, but remains opposed to any veto for the DUP.

The official statement said only that the two men would meet “in the North West of England” for talks. It is thought the venue is in the Liverpool area, though no details have yet been released. The meeting will not be open to the media, it is understood.

It will be the second meeting between the two leaders in the space of three weeks. They also spoke by telephone earlier this week. However, sources in Dublin remain sceptical that any breakthrough on Brexit is likely before next week’s EU summit.