Stephen Donnelly congratulated on withdrawing from inquiry by FF Senator 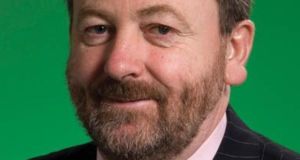 Senator Denis O’Donovan: said Stephen Donnelly had “the wisdom, good faith and trust to stand down from the committee, which has a particular agenda and motive’’.

Independent TD Stephen Donnelly was congratulated for resigning from the banking inquiry committee during renewed Seanad exchanges on the controversy.

Fianna Fáil Senator Denis O’Donovan said Mr Donnelly had “the wisdom, good faith and trust to stand down from the committee, which has a particular agenda and motive’’.

He accused the “politburo of the Taoiseach, Tánaiste and Ministers of Finance and Public Expenditure’’ of colluding to try to damage the reputation of the House and the committee of selection in public remarks. He added that the Taoiseach and Ministers were smarting and hurting because of the own goal scored.

He said the committee of selection was set up more than 20 years ago, and it was unprecedented that the “politburo’’ got its way, had a majority and could dictate the terms of reference of the inquiry committee.

“They will try to project and gauge the outcome of the inquiry and set it out in such a way that it will be politically damaging to Fianna Fáil more so than others.’’

Ned O’Sullivan (FF) said members of the Cabinet had put their feet in the controversy with weekend comments, reopening a debate “that we had robustly concluded in the chamber last week’’.

Ivana Bacik (Labour) said she hoped the members of the committee could be left to get on with their important work.

“It is hugely important and urgent that we see the terms of reference set in order that the hearings proceed as envisaged.’’

He said he welcomed the fact that Socialist Party TD Joe Higgins had been recommended for inclusion on the inquiry committee because somebody from the hard left was needed to ask the difficult questions. “The Irish people did not frolic en masse and engage in gambling and misbehaviour.’’

Mr Norris said the inquiry was being set up to pay the gambling debts of German banks to the tune of some €47.5 billion. In the same vein, the debts of French and British banks were €27.5 billion and €12.5 billion respectively.

“We are stuck with the bill for this even though we did not run it up. I want to know how and why this happened.’’