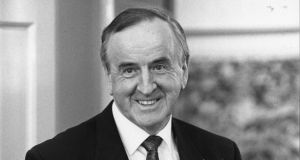 Albert Reynolds: “He had the vision to see the opportunity and the courage to act on it. We should be very grateful to him for that,” said Tony Blair

Leading national and international political figures have united to pay tribute to former taoiseach Albert Reynolds for his role in bringing peace to Northern Ireland.

Mr Reynolds, who died yesterday, aged 81, was often a divisive figure during his period as taoiseach but former political friends and foes were united yesterday in recognising his central role in the peace process.

Mr Reynolds served as taoiseach in a tumultuous period between February 1992 and November 1994 and was recalled yesterday as a risk-taker and peacemaker.

While his impetuosity precipitated the collapse of the two coalition governments he led, first with the Progressive Democrats and then with Labour, he also threw convention aside to instigate the process that led to the Downing Street Declaration of 1993 and the IRA ceasefire of August 1994.

Former US president Bill Clinton said the world owed Mr Reynolds “a profound debt of gratitude” for the leadership he gave alongside British prime minister John Major in laying the foundations for the Belfast Agreement. He said Mr Reynolds had “worked hard and risked much as taoiseach” to advance peace in Northern Ireland.

“I will always be grateful for his encouragement, advice, and support in the peace process,” he added.

Mr Major described Mr Reynolds as a “lovable and remarkable friend. We’ve been able to have the fiercest of rows without leaving scars. I understood Albert’s difficulties and he understood mine,” he said, adding that “Albert was a man prepared to take risks”. Mr Major said he “treasured” his last meeting with Mr Reynolds at his family home and said theirs was a relationship “unlike any other that I had during my time in government”.

“Albert Reynolds played a vital role in stimulating and encouraging a peace process that in time led to the Good Friday Agreement and to today’s peace,” said former British prime minister Tony Blair. “He had the vision to see the opportunity and the courage to act on it. We should be very grateful to him for that.”

Mr Reynolds’s successors as leader of Fianna Fáil also paid tribute to him. “He was not afraid to take political risks to further the path of reconciliation,” said former taoiseach Bertie Ahern.

The remains of the late Mr Reynolds will lie in repose in the Oak Room of the Mansion House in Dublin from 1-6 pm tomorrow before the removal to the Sacred Heart Church, Donnybrook at 7.30 pm.

The funeral Mass will be at noon on Monday with burial in Shanganagh Cemetery.