State Papers: ‘What would you do if Dundalk were bombed?’ 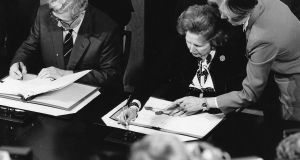 The then British prime minister Margaret Thatcher asked what the reaction would be if the British bombed Dundalk in pursuit of IRA terrorists when she met then taoiseach Garret FitzGerald shortly after the signing of the Anglo-Irish Agreement in 1985.

The agreement, which was signed by the two leaders at Hillsborough Castle, Co Down, on November 15th, 1985, gave the Irish government an advisory role in Northern Ireland’s government. It also confirmed there would be no change in the constitutional position of Northern Ireland unless a majority of its people agreed to join the Republic in a vote.

In addition, the agreement set out conditions for the establishment of a devolved government in Northern Ireland.

Notes of the conversation between the leaders at a meeting in Luxembourg during an EU summit a little over two weeks after the agreement are contained in government files released under the 30-year rule.

“People in the South come to the North to commit criminal acts and then dash back. That is what I said to the Americans when the Israelis bombed Tunis. What would you say if Dundalk were bombed to stop this?” the British prime minister asked Mr FitzGerald.

The taoiseach responded: “We have no evidence against people in Dundalk – if we had, we would arrest them. For example, the evidence I have is that escapers from the Maze are not in Ireland. I am told that some of them are in Scotland.”

“In the Irish community in Glasgow,” said Mrs Thatcher.

Earlier in the conversation, the details of which are contained in a note by the then cabinet secretary, Dermot Nally, Mrs Thatcher said she needed three things.

“Can you give me evidence on which to charge more of them?” asked Mr FitzGerald. “If there is evidence against anybody, there are channels through which it can be communicated and action will be taken.”

“If we have evidence, we will get it to you,” responded Mrs Thatcher, who then made the reference to Dundalk.

Later in the conversation, Mr FitzGerald raised the possibility that the then Northern secretary Tom King might indicate the possibility of early release for IRA prisoners if there was a sustained period of reduced violence after the agreement.

“That would be dynamite – no, not dynamite; nuclear. We could not think of relief for people guilty of bombing, of murder, of other atrocities,” she responded.

The prime minister opened the conversation, which lasted for half an hour on December 3rd, 1985, by expressing her concern at the scale of unionist opposition to the agreement, which had been signed on November 15th.

“I am very worried about developments. You have all the glory. We have all the problems,” she said. “The unionists’ reaction has been much worse than expected. Even the Alliance say that [Ian] Paisley and [Jim] Molyneaux are articulating the popular feeling they are getting.

“They are saying, supposing I don’t get the agreement on security, what happens? We must have visible evidence of movement in their favour. We must have a visible security presence on the Border.”

The taoiseach responded: “It is very important that we go ahead as planned. We cannot let threats or menaces now throw us off course.

“At the same time I agree that we must take steps to detach moderate unionists from what is happening. There is evidence of this already.”

Mrs Thatcher said visible action on security was vital. “Can you ratify the Convention on Terrorism?” she asked the taoiseach. “The people concerned are angry now that we didn’t go ahead with the possibility of constitutional change.”

Pressed again on the convention, which was proving a thorny political issue in the Republic, Mr FitzGerald explained: “You know that before signing the agreement I had legal advice that I should not sign the Convention on Terrorism before I had legislation on the subject.

“I am looking at it again to see if there is any possibility that I can sign first and then legislate. If so, we will need to consider very carefully that it is the best time to move on this.” Mrs Thatcher repeated her view that Mr FitzGerald had got the glory and she had got the problems, and she pointed to the resignation of her own parliamentary private secretary, Ian Gow.

“I am deeply upset about the betrayal charges,” she said. “The trouble is they will hear only what they want to hear. There is no good saying things in an English voice. Irish voices must come in and help.

“They [the unionists] have heard ‘this is the nearest thing we could get to joint authority’. However, I suppose that showed that you have not got joint authority.”

She repeated her worries about the charges of treachery being made against her by Enoch Powell and leading unionists.

“That is not to say that we could ever have got into discussions with them,” she said. “Does anyone really think that if we had, we could have got the agreement? At the same time we must now let the Unionists know what is going on and involve them.”

1 Martin ‘seriously concerned’ at Covid complacency amid pressure over church events
2 The far right rises: Its growth as a political force in Ireland
3 Golf group insist they adhered to public health guidelines during Tullamore trip
4 Life in Level 3: What will happen under new restrictions in Dublin?
5 Blanchardstown, Tallaght top table for highest Covid-19 rates
Real news has value SUBSCRIBE