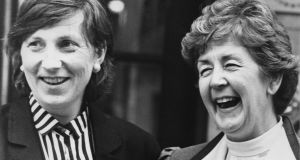 Ally chairwoman Gemma Rowley and minister of state for women’s affairs Nuala Fennell at the launch of the Reach Out campaign in 1985. Photograph: Dermot O’Shea

Employers submitted to the department of labour that the operation of the Maternity Protection of Employees Act had posed “constraints” on the efficient organisation of their businesses, large and small.

The Federated Union of Employers made a submission to the department in September on plans to change employees’ notification requirements under the Maternity Protection of Employees Act 1981.

There had been an “increasingly high” take-up of maternity leave entitlements, the FUE said. It said it was not possible to say, with certainty, how many employees had benefited from the entitlements given to them under the Act.

However, the number of claims made for maternity allowance, as reported by the department of social welfare, must be a reliable lower estimate.

Some 10,727 women had claimed maternity benefit from the State in 1985 compared with 4,603 just four years earlier.

The organisation said the operation of the legislation had “imposed constraints” on the efficient organisation of employments, large and small.

It said the constraints placed on employers in relation to organisation and absenteeism before and after maternity leave “far outweigh the difficulties experienced by a very small number of individual employments”.

It was the body’s experience that employers would deal “sympathetically” with an employee who had failed to comply with the notification procedures for taking maternity leave, it said.

1 Coronavirus: Further two deaths in Republic as expert warns against ‘rush’ to ease restrictions
2 Changes to Covid-19 payments to be considered next week, Minister says
3 Army officers evacuated from Goma after weeks of delay
4 George Floyd death: Clashes and curfews in many cities as protests sweep US
5 Over 300 church groups unite for online Irish Blessing video
Real news has value SUBSCRIBE